A Vicious Circle of Kremlin Propaganda in the West 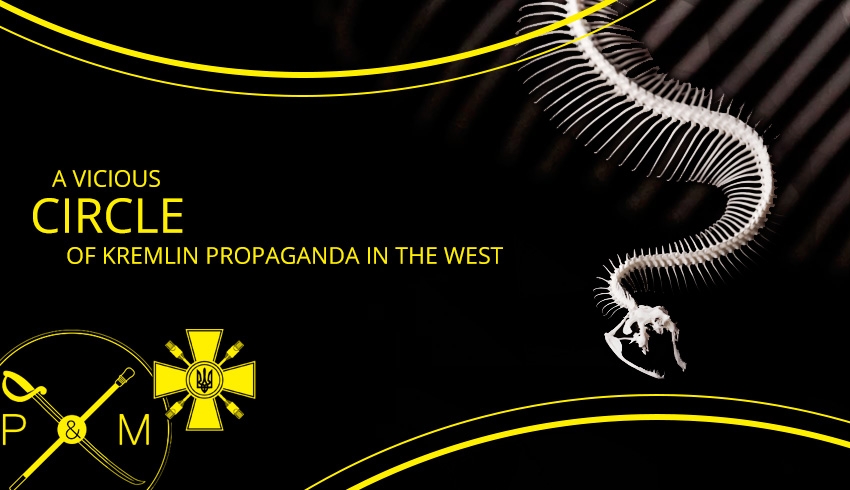 At November 6th 2018 US held so-called midterm elections. Americans re-elected all 435 seats in the United States House of Representatives, and 35 of the 100 seats in the United States Senate. In addition to this, many states had municipal and governor elections. To counter the spreading of Russian propaganda and to prevent Kremlin from interfering in the elections procedures, U.S. Cyber Command started a number of cyber-operations. For these purposes a government secured funds of 40 million USD. These funds will be directed into the fight with Russian disinformation efforts, and also against similar actions from Iran and China, which are aiming for foreign public. The funds from US budget were allocated in the late September.

Still, American media shouts alarm (https://www.buzzfeednews.com/article/kevincollier/russia-meddling-midterms-white-house-silence), and comes up with more and more stories about Russian interference in the US election process, while White House has no saying in this matter, as often it is. Journalists present more and more evidences of how Russian propaganda in US stays active as always. Many candidates from Democratic Party became victims of hacking attacks. Democrats and the sympathetic media are using the question of Russian interference almost customary, as a kind of leverage in the election campaigns, blaming president Trump personally and Republican Party in general in the criminal omission.

Republican’s stance on this sensitive topic is a bit different. Yes, they are fine with admitting many cases of Russian interference, both in the Presidential campaign of 2016 and midterm elections of 2018. Yet they are convinced that the effect of Kremlin’s propaganda was negligible. An example of stance like these would be a statement by John Bolton, President Trump's national security advisor at October 22th meeting in Moscow. He repeated yet again that Russian interference in 2016 did not affect the outcome of voting. “Today I emphasized to my Russian colleagues that I do not think they achieved anything by interefering the 2016 elections, or affected them in any way”, said Bolton. “Yet this have caused an extreme mistrust to Russia, and is a main obstacle in negotiating of questions where our national interests match”.

When taking into account how widely was covered the subject of Russian informational influence onto US and European countries, one can think that Kremlin’s propaganda is omnipotent. Western media is eager to tell how Russia succeeded to USSR traditions of secret dis-informational operations. Yet the work of Kremlin’s propaganda machine has little to do with secrecy. In contrary, Russia acts almost openly, sometimes and some places it looks like they intend to be blatant. It spread the rivers of disinformation not even concealing its intentions, as if trying to pose for being more influential than it is. 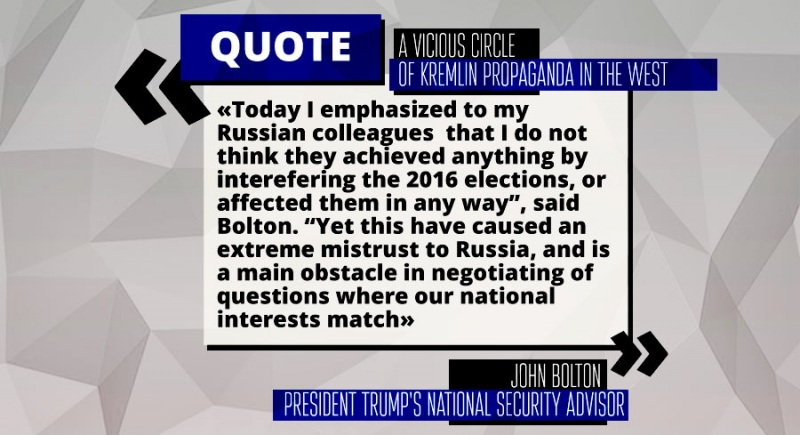 Getting familiar with internal processes of Russian Federation propaganda activities in western countries makes you understand that all these countless streams of disinformation are often a slapdash job. As it often happens in Russia, there’s little beyond the nice facade of the informational influence networks. Trying to spend the considerable funding provided for propaganda directed onto the West, Russian covert ops services and controlled media networks create a number of uniformed web sites which share the uniformed messages. The schemes of financing and the systems of management of such projects do not differ much. A good share of funds transferred via the Russian-controlled offshore companies to pro-Russian activists abroad is immediately spent onto Russian web troll factories, which provide an impressive statistics of web sites visits and produce the never-ending commentaries under the articles. Then everyone report their success in propaganda warfare to each other.

An illustrative case could be a recent investigation of the American website BuzzFeed News (https://www.buzzfeednews.com/article/holgerroonemaa/russia-propaganda-baltics-baltnews) into how Kremlin used the offshore companies in Netherlands, Serbia and Cyprus to secretly finance a network of supposedly independent news websites in Easter Europe and Middle Asia, using them to share the agenda to Moscow’s benefit.

Investigation’s documents are significant, and large in numbers. They are based on successful work of law enforcement and security forces in Baltic countries. Publication even encompasses some proofs of pro-Russian activities of “Ukrainian News” media, which were gathered by Security Service of Ukraine while investigating the case of Kyrylo Vyshynsky, who was arrested in May 2018 and charged with treason and waging informational war against Ukraine on behalf of Russian Federation.

American journalists investigation shed some light onto the activities of Blatnews media network, which still continue to function in Baltic countries, in Estonia, Lithuania and Latvia. The articles on three web sites match partially, all three of “independent” media are published in Russian and they are aimed onto Russian-speaking minorities of these three countries, members of NATO and EU.

We should not burden the reader with all these factual evidences, just note the most exemplary moments which clearly illustrate the ways of how Russian propaganda works abroad.

First of all, the propaganda articles are very adamant, and often are emotionally colored. Loyal audience is fed with hand-picked pro-Russian messages on a regular base. If you glance through the articles of Estonian version, you can find articles akin to “Why the energy independence of Estonia became a problem, not an advantage”, “How Russia reacts to discrimination of Russians in Baltic countries”, “How NKVD exterminated Ukrainian Rebels in 1940s”, and so on.

Second, the editorial policies of all three web sites is dictated from Moscow, on a daily basis. From the Skype conversations intercepted by Estonian law enforcers we know about the “topic lists” which obligated to cover, say, three of the five proposed topics.

After founding of three Baltnews websites in 2014, there was anintense messaging between the Baltnews employee Kornilov and a “Russia Today” employee Sviazin, who acted as a supervisor to the network. They sent thousands of messages to each other during 2 years. They often discussed the editorial policies. It is worth of mention that in the media agency “Russia Today” (“RIA Novosti” until 2013) Sviazin was responsible for news agency and website “Sputnik”, and is closely affiliated with RT TV channel (previously known as “Russia Today”).

At May 25th 2016 Svizain accidentally sent to Kornilov a complete list of topics which were in need of covering in the whole network of Kremlin-controlled media all through the former USSR countries: in Baltic states, in Kyrgyzstan, Belarus, Georgia, Moldova, Uzbekistan, Kazakhstan, Azerbaijan and Osetia — a separatist enclave in Georgia. Estonia was mentioned in the list twice, once for Baltnews, once for local “Sputnik” branch.

BuzzFeed News compared the list of topics to the articles published in the same day in all these countries, and found that, except for two local branches of “Sputnik”, all others indeed published what they were told to publish.

Third, curators from Moscow not only try to spread disinformation, but also try and use the controlled media networks for monitoring and intelligence. Sviazin often demanded from Kornilov (though not too successfully) to send a weekly list of important events announcements through the Skype. These conversations of spies wannabes is so self-speaking, it is worth to quote some fragments. “Alexandr, we need the announcements of the main events from 24th to 30th, and this is urgent now. It will be too late in an hour”, insists the curator. “I don’t have these”, answers Kornilov. “So where should I get them? I need to add them to a global calendar in time for the meeting in 4 PM”, the Moscow propagandist is anxious.

In the other episode of the messaging curator tries to explain what exactly he needs. He demands to be informed “about the main future events. You know, the government meeting Tuesday, government resigns Wednesday, Obama visits Thursday, some other thing Friday...” Sviazin instructs. “I don’t have information like government meetings, Obama visits and government resignations” tries to avoid the duty of providing information Kornilov. “That’s just an example, you can send what you have”, the high rank employee of “Russia Today” seems to be ready to settle for anything. 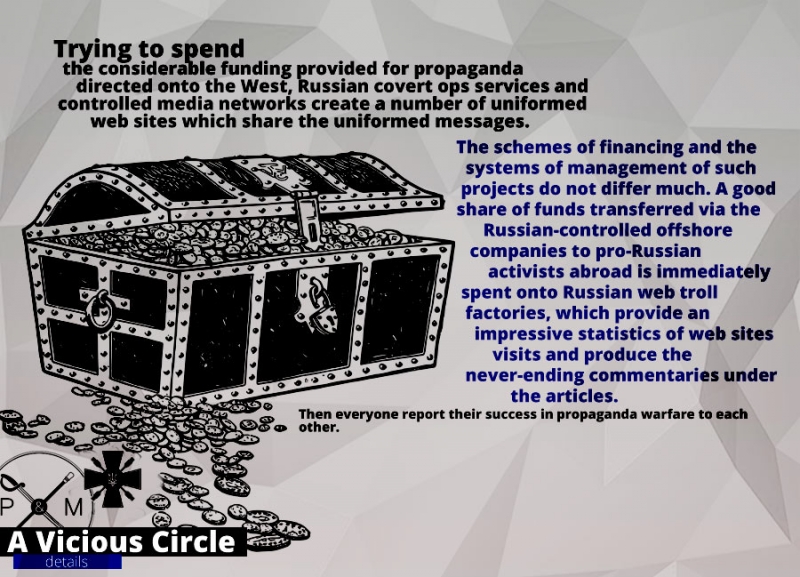 Fourth, the funding scheme of propagandist websites was functioning through the chain of a companies serving as the middlemen, which financed different projects in different countries at the same time. Hastily building the funds transferring model Russians didn’t seem to care that same offshore companies wouldn’t finance the services of different websites.

First website funding contract was signed between Kornilov-controlled non-governmental organization and the Media Capital Holding B.V company in 2014 (the company is registered in Netherlands and is controlled by the offshores of “Russia Today”). Later the funds were also transferred through Cyprus-registered Barsolina Ventures Ltd.

Early 2015 Kornilov started to account to Moscow management sending the monthly reports on web traffic, including the headlines of most visited articles. The funding from Cyprus totaled to 11400 Euro each month.

Later the financing was performed through another dummy company, the SPN Media Solutions DOO Beograd (registered in Serbia, it is owned by “Russia Today” through the intermediaries). Accounting records of this company show that in years 2015-2017 the yearly flow of the funds totaled to approx. 3.5 million Euros. According to Serbian registers the management of this company was composed from Russian citizens. It is not hard to conclude that through this company alone a lot of Baltnews-kind propagandist websites were funded.

Serbian company SPN Media Solutions is a figurant of Ukrainian court decision from July 2018, as it was used to secretly fund the Ukrainian office of “RIA ‘Novosti v Ukraine’” (“News in Ukraine”). Security Service of Ukraine deputy chief Viktor Kononenko claimed in May that the aforementioned Serbian company transferred 53 thousands Euros of supposedly “Russian origin” to Ukrainian companies, which in turn directed these funds to Russian government media agency department in Ukraine.

Latvian Security Service also confirmed that the local Baltnews website was financed from Russia through the companies in other states. “The information gained points that the money from Russia were the main funding source of Beltnews.lv”, said Ēriks Cinkus, deputy chief of security service.

Fifth, a funding model used was characteristic by the fact that some parts of funds were returning back to Russian Federation. Nothing can be done in Russia without the kickback. First money were transferred to Baltic countries through the dummy companies in Netherlands, Serbia and Cyprus. After the approval of topics by curator, the controlled medias bought “web clicks” and tested the system of paid commenting from Russian web troll factories, to artificially increase the statistics of web site visits.

Skype messaging logs prove that Estonian Baltnews artificially increased the web site traffic on a regular basis, buying the fake unique visits from miscellaneous Russian companies suggesting this kind of service. One of Kornilov’s assistants contacted one such company in October 2014, the very same month the Baltnews.ee was created. “I suggest first try something about 2000 clicks, and if everything will go as I plan, we can agree on 14 000 rubles”, Kornilov’s assistant writes in the chat of one Russian company on web site promotion.

Propagandists did not limit themselves with fake visitors to websites. They also paid for fake commenting by so-called “web troll factories” for some articles. The cost of single comment was 13 cents.

Estonia security service confirmed to BuzzFeed news that Baltnews is similar in management model to other Kremlin propagandist operations, as it serves as a vicious circle of financing and manufacturing of propaganda, which Kremlin then tried to present as a true voice of local Russian-speaking minority, to use it to support its own goals in foreign relations.

As of this moment, Baltnews websites continue to operate in all three Baltic countries. 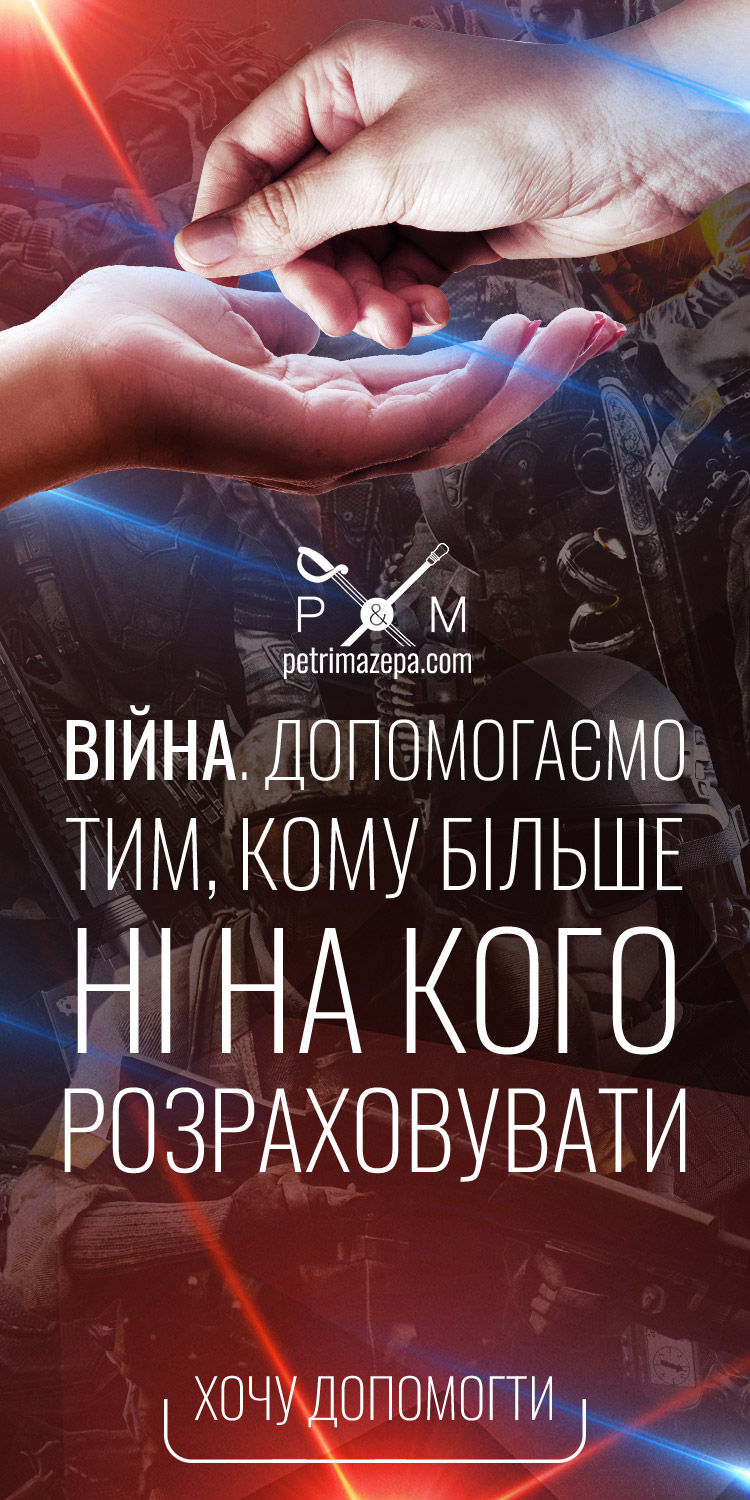