Despair as a tool, brawling as a way of life 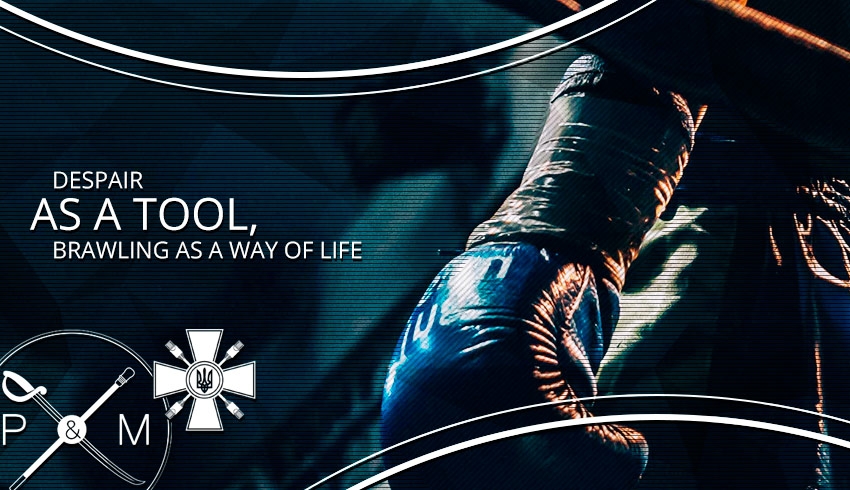 As a part of our special joint project with the Ministry of Information Policy we have mostly published articles written by external authors. Several texts I gave to Ronin. We agreed that there would be three topics I keep for myself in order to make a small New Year special. Mainly because I was going to write these articles anyway. So yes, the materials presented below are going to accuse some marvelous people while the cooperation with the Ministry is still active. You may start with your own accusations now.

On a serious note, all three articles discuss my favourite theme: not letting Russians bury us with our very own hands. As well as turning the graves that the enemy was digging for us into trenches.

Trust in Ukrainian mass media has been declining in the last years. Web 2.0 is partly to blame: more and more people are reading the news in the blogs, social media and messengers instead of websites. Part of the blame can be placed on the unpleasant process called “bubbling” in English and “cocooning” in Russian: people get less willing to obtain unbiased information and choose to hear something that fits their preformed prejudiced opinion instead. Appalling professional degradation is to blame as well. In short, it was a combination of nasty factors, both global and local, that has led our media space to its current state.

Its current state is being deep in something dark and foul-smelling. Let’s not get more specific, shall we?

Instead, let’s demonstrate why Kremlin doesn’t need to keep paying Ukrainian media to promote its narratives. Kremlin is paying to some (mainly, from the money belonging to the ousted Ukrainian politicians who landed in Russia), though these payments are mostly done out of habit and just to make sure. No need. They would have done the job for free.

This is easy to prove. Let’s start by asking, “What are the main goals of the Kremlin’s informational machinery? What is the strategy of its informational aggression?”

What the enemy needs

In general, there is nothing new here. In Ukraine, Europe, and in the US alike, Kremlin is instigating conflict rather than backing certain political personalities. It not about who will end up at the steering wheel; what matters is destabilization of the mechanisms controlled by that wheel, disruption of the chain of command, breakup of economic links and ultimate weakening of the country. Kremlin is trying to remove its adversaries by their own hands. This is called “asymmetric action”. It manifests in the attempts to do the following:

The question is: which of the above are Ukrainian mass media not doing themselves, for their internal reasons?

Why should Kremlin give money for what Ukrainian journalists are happy to do on their own?

What is being done and how?

I like to give one simple example of neuroticizing the society. Once upon a time I was invited as a, pardon my French, as an expert to the certain TV channel, to discuss something important with the hostess of the show. So there I was, sitting in the production studio, waiting to go on air, watching the news in front of me. After about the fifth news story about citizen N from the village X who ate the dead body of his own grandmother after raping her, I asked the hostess, what is this – is this some kind of criminal news section?

“No, just the usual news,” she shrugged.

This happened in the studio of the normal TV channel. Not one of those channels that you like to scold. Nevertheless, even there “the usual news” followed the pattern of “murdered, dead, exploded, robbed, oh and a cute little panda was born in the Tokyo zoo.” The usual pattern. The usual pain.

This cannot be explained by malice. First, journalists and editors faithfully believe that horror, blood, guts, and more blood sell better. They are partly right, and there is evolutionary explanation for that: from times immemorial people have responded more vividly to the news that they associate with threat. Second, TV channels compete for the viewers who have their TVs on in the background. Thus the need for attention-grabbing negativity, as well as for the totally unrealistic, “screaming” narration in the news. Have you noticed that many journalists are narrating as if they are acting out a hysterical personality in a bad play? Well, this is why.

And, since we mentioned thousands of Russian bots spreading horror stories about what’s happening at the front line, let us mention thousands of their unintended assistants – Ukrainian media persons and ordinary users of social networks, all of them spreading the falsehoods even further, gleefully and for free. 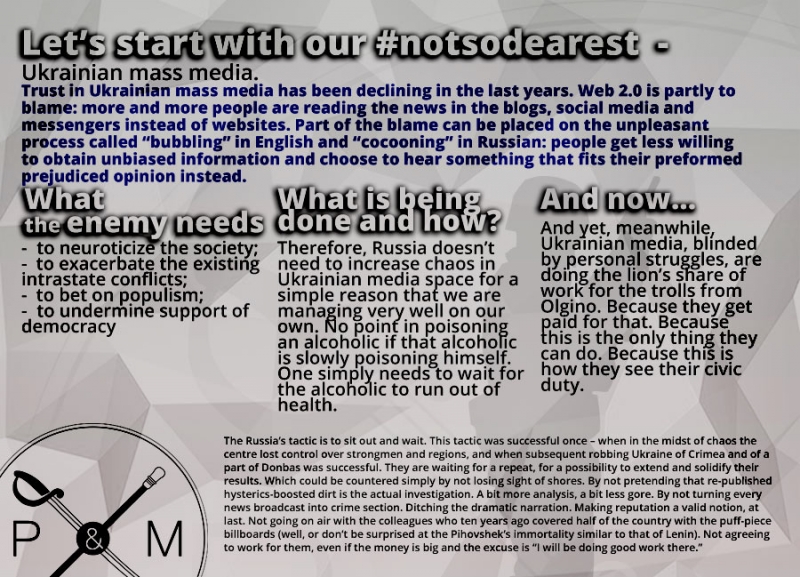 Exacerbating conflicts is something that Ukrainian media manages to do as a part of conflicts between the owners. They are channeling the endless stream of discrediting messages: publishing dirt is some media’s main source of income, while the others receive most of their income from the timely removal of dirt. The very popular “journalistic investigations” genre in Ukrainian realities is a genre dedicated to publishing dirt. Which often happens without any processing, of with the bare minimum of processing, not to mention any attempts of fact-checking. Copy-pasting the materials handed down by the patron into a private blog – at most, with addition of some pathos and many times the word “truth”. There are certain personalities who managed to make a name for themselves by doing this.

It’s hard to argue against any of this. In some ways, this is how democracy works. But then we have to deal with the next point.

Simplification. Populism. Appealing to the worst of the popular sentiments.

It happens sometimes that no sensationalism can be squeezed out of the data. It just happens. Everything has been advertised, but digging up the sufficiently dreadful horrors simply failed. In this case it’s time for emotional pressure.

This is when war and martial law can really come in handy, as well as poverty and the delighted relishing of it. Is a politician eating in a restaurant? It doesn’t matter that he is a dollar billionaire, it doesn’t matter that people need to eat sometimes – he goes to restaurants while there is a war going on! While the old granny’s are hiding in the lavatories from the supermarket security guards to eat half a dumpling that they grabbed from the shelf! (link to a popular blogger).

Later on these very journalists are surprised to get roasted over their apartment purchases. And their friends the activists wonder why there are so many questions over their house, which is, really, quite small.

I beg your pardon, but you were the ones who nurtured this trend. And you cannot stop speculating. Where the facts are lacking, you compensate it with pathos. The same thing that the Russian propagandists are doing. Naturally, their motivation is different – sometimes selfish, sometimes noble. But the end result is same people, same stuff, same place.

Undermining institutions is an inevitable part of political struggles. If there is a certain politician who claims credit for progress in developing certain institutions, it is in the interest of another politician – and his media persons – to downplay those achievements by showing that the institutions are actually doing badly. Shall I give examples, or is it something that readily comes to mind?

Therefore, Russia doesn’t need to increase chaos in Ukrainian media space for a simple reason that we are managing very well on our own. No point in poisoning an alcoholic if that alcoholic is slowly poisoning himself. One simply needs to wait for the alcoholic to run out of health.

A cute little panda is born

In other words – it would be nice to end this piece on a positive note. Which is a tricky thing to do. Especially knowing that the election year is coming, the year when all the actors lose the remaining shreds of consciousness, swear by all the remaining gods, and fight like there is no tomorrow.

The Russia’s tactic is to sit out and wait. This tactic was successful once – when in the midst of chaos the centre lost control over strongmen and regions, and when subsequent robbing Ukraine of Crimea and of a part of Donbas was successful. They are waiting for a repeat, for a possibility to extend and solidify their results.

Which could be countered simply by not losing sight of shores. By not pretending that re-published hysterics-boosted dirt is the actual investigation. A bit more analysis, a bit less gore. By not turning every news broadcast into crime section. Ditching the dramatic narration. Making reputation a valid notion, at last. Not going on air with the colleagues who ten years ago covered half of the country with the puff-piece billboards (well, or don’t be surprised at the Pihovshek’s immortality similar to that of Lenin). Not agreeing to work for them, even if the money is big and the excuse is “I will be doing good work there.”

The cure is simple. And yet.

And yet, meanwhile, Ukrainian media, blinded by personal struggles, are doing the lion’s share of work for the trolls from Olgino. Because they get paid for that. Because this is the only thing they can do. Because this is how they see their civic duty. Because go to hell, Tregubov, why are you scolding the nice us in your special project with the Ministry?

I could go there, alright – after all, who am I to spit into the collective half-conscious?

Yet I do possess a number of useful advantages. First, I went through the feeling of losing my Motherland once. Second, I know how to shoot.

What about you, friends?