«Fascists». Part 1. How the Kremlin turned Ukrainians into anti-Semites 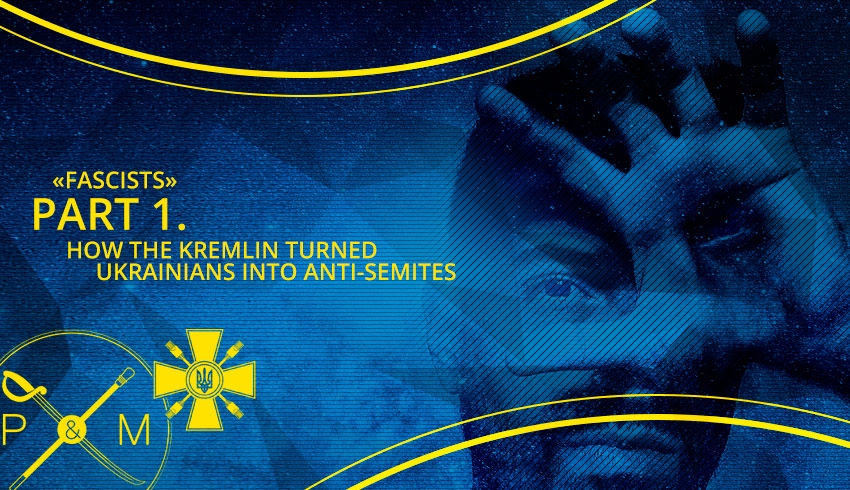 The campaign aimed at discrediting the Ukrainian Armed Forces began simultaneously with Russian aggression in the Donbas region. Although, of course, the subject of fascism and anti-Semitism was efficiently put to use by the Kremlin propaganda long before. It dates back to the times of Viktor Yushchenko presidency and the activities of Volodymyr Viatrovych as the  Head of Archive of the Security Service of Ukraine, where he had really put everything in order and turned it into an effective state mechanism.

However, in February-March 2014, the Armed Forces and volunteer battalions became the main targets of  Kremlin propagandists. They were referred to in fake news as "hit squads” and "fascists", and the media attempted to draw parallels with the Second World War.

At the same time, they used the term "militia"to describe Donbas guerrillas, which, according to researchers of the Media Sapiens project, "bore clear connotations with the heroic struggle of the Soviet people against German aggression during the Second World War."

As a matter of fact, it does not make sense to describe all the intricacies and etymology of propaganda work. It’s just necessary to understand the principle. And the actual principle was that different triggers - words and symbols that could switch on different patterns of behavior - had to be used to reach different target audiences. These triggers depended on the cultural and informational environment in which a  particular person lived, and on the contents of this specific cultural environment.

As an example, for the most part of the Russian (formerly Soviet) population, the theme of the Second World War is absorbed with maternal milk. People who were born before 1990, have consumed the military topic in virtually unlimited quantities: in the form of films, songs, school lessons, museums, war games in the courtyard etc. In the Soviet period they knew exactly how to do propaganda.

That is why almost every Russian citizen knew precisely who such "fascists" were, how did the “hit squadrons” look and what they were doing (surely, they mostly burned civilians alive), as well as what was going to happen to the Russian-speaking population, when the so-called "fascists" seized the Donbas.

The word "junta" is, in essence, on the same list. If you ask the average Moscow resident for his definition of this word, he is unlikely to give the exact criteria of this phenomenon. However during the Soviet period this word got overgrown with negative connotations. 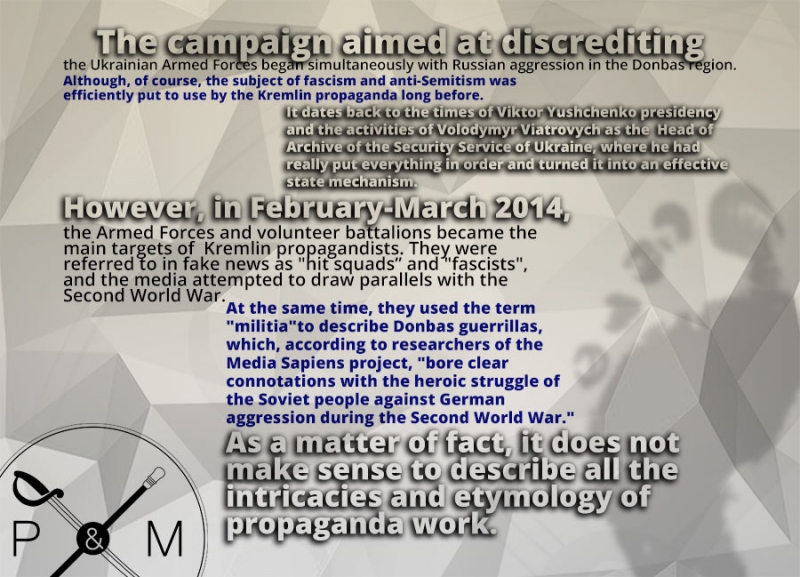 As for the European and American parts of the world's informational space, such words as "fascists", "hit squadrons", "junta" have no influence on them because no Soviet-style propaganda methods were practiced on their territory.

But the topics related to the "Jewish question" are still more relevant than ever. First of all, they are important because debate around the Holocaust are constantly supported by the world community. Second, there are communities that react sensitively to any changes to this topic in the informational space. That is why the Russian side is actively promoting narratives associated with anti-Semitism in Ukraine across the Western community. The goal, of course, is to convince Western elites to refrain from supporting Ukraine in repelling Russian aggression.

In April 2018, American Congressmen Ro Khanna and David  Cicilline initiated an appeal to the US State Department, which was signed by more than 50 other legislators, to put diplomatic pressure on Ukraine and Poland in connection with the Holocaust denial and the growth of anti-Semitism levels. The letter was published on the official website of Congressman Khanna. Congressmen asked to provide information about the actions taken  by the State Department to monitor the rise of anti-Semitism and Holocaust denial and distortion.

Ukrainian side reacted quite operatively to this document. The Association of Jewish Organizations and Communities of Ukraine, VAAD, issued the statement regarding this letter, which noted that the text of the letter contained a number of allegations or at least incorrect formulations that did not correspond to reality.

For example, the VAAD experts noted that the statement in the letter from Ro Khanna and his 56 colleagues about the state-supported distortion and denial of the Holocaust, which  was presumably observed in Ukraine, had nothing to do with reality. The Association of Jewish Organizations and Communities of Ukraine called such words “absurd". After all, no one could point to a single fact when the Ukrainian state had supported the denial of the Holocaust in one or another form. There are doubts that any of the congressmen who signed the letter could name at least one such case.

The VAAD also underlined  that the state was increasingly involved in activities related to preserving the memory of Holocaust victims through teaching, research and creating memorial sites.

In this letter, congressmen also stated that "the laws of Ukraine from 2015 go even further in praise of the Nazi collaborators, establishing criminal responsibility for denial of their heroism." This statement is also not true. In the Law of Ukraine "On the legal status and honoring the memory of the fighters for the Independence of Ukraine in the XX century" there is nothing at all about heroism or responsibility for its denial. Actually, the interpretation of this law, proposed by the congressmen, is more of a remake of Russian version of events in Ukraine.

In fact, the law states an obvious fact - that the participants in the struggle for Ukrainian independence were doing exactly this one thing - defended the independence of Ukraine. And no such organizations as the SS Halychyna division or Nachtigall  Abwehr battalion are mentioned there. Thus, we can assume that the author of the letter was using the translations and analytics reports provided by his Russian partners. It remains unclear why did Ro Khanna set up his Congress fellows by persuading them to sign an undoubtedly false document. The allegation of a "State-sponsored Nazi glorification" and a "state-backed Holocaust denial" were called defamation.

Referring to the report of the Israeli Ministry for Diaspora Affairs, congressmen argued that "the whitewashing of of Ukrainian heroes was accompanied by an increase in anti-Semitic incidents throughout Ukraine." Indeed, the report published by the Office headed by Minister Naftali Bennett, contained a statement on the double increase in the number of anti-Semitic incidents in Ukraine in 2017 compared to the previous year, but this data is not reliable.

The Department of Diaspora Affairs of the State of Israel did not conduct its own monitoring. While preparing the report, they focused on singled-out  reports from the media and social networks. For that reason the report can’t be regarded a reliable source of information. The Association of Jewish Organizations and Communities of Ukraine carried out its monitoring, which did not record negative dynamics simply because in 2017 Ukraine had not recorded any anti-Semitic incident related to violence.

At the same time, in many Western European and US countries, the number of attacks on anti-Semitic basis is calculated by dozens. It is strange that the reports of the VAAD, which have been sent to the US Department of State among other reports, have been ignored for the past 15 years.

VAAD experts also noted that in previous cases when American congressmen wrote similar letters, in 2009 and 2013, it could be ascertained that such letters were initiated by political technologists who worked for the Kremlin.

Volodymyr Viatrovich also joined the opinion of VAAD. "It is strange that such a large number of respectable American politicians put their signatures under this document," he said in a commentary to Radio Liberty. "For example, when Stepan Bandera, who had been a prisoner of the Nazi camp Sachsenhausen, or Roman Shukhevich, who since 1943 had headed one of the largest anti-Nazi resistance movements in Europe which was occupied by Third Reich at the moment, are referred to as an example of the celebration of the collaborators, this outlines only the low level of knowledge of people who signed the document ", - said the historian.

In this letter, congressmen presented  an information campaign dedicated to the Ukrainian Insurgent Army(known as UPA) as an example of pro-Nazi or collaborative propaganda. It consisted of two exhibitions "UPA: the response of the unconquered people," one of which spoke about the massive anti-Nazi struggle of the Ukrainian Insurgent Army, and in particular, about the Jews who, in the ranks of the UPA, fought first against Nazism, and then against communism.

The defamative letter of Ro Khanna was criticized not only in Ukraine. Christopher Harrison, who worked for Defense Secretary Donald Rumsfeld and Secretary of State Condoleezza Rice, also as an advisor to Senator Ted Cruz's presidential campaign, expressed his opinion on the pages of The Hill. He is a co-founder and head of ITJ Strategies (offices in Washington and Kyiv) specializing in information aggression committed by Russia.

Not entering into small details of the arguments Christopher Harrison brings to the pages of the publication, one can generally see that he believes that either the American Congressman unknowingly helps the Russian side to discredit Ukraine, and this makes Ro Khannah a “useful idiot" or he has ties with the Russian side and pursues certain interests by lobbying and promoting the Moscow-created narratives about Ukraine.

Russia started playing a Jewish card in the informational war against Ukraine back in 2014, right after initiating the conflict in the eastern part of the country and annexing the Crimea. In March 2014, the Russian channel, RT, released a loud fake, stating that Ukrainian Jews "were escaping from Kiev" due to an outbreak of anti-Semitism. This was described in detail by StopFake.

In fact, the executive committee of the World Jewish Congress during the annual meeting voted for a resolution on the growth of anti-Semitic violence. Ukraine was excluded from the list of countries before voting. This was announced by the head of the Congress of National Communities of Ukraine Joseph Zisels. 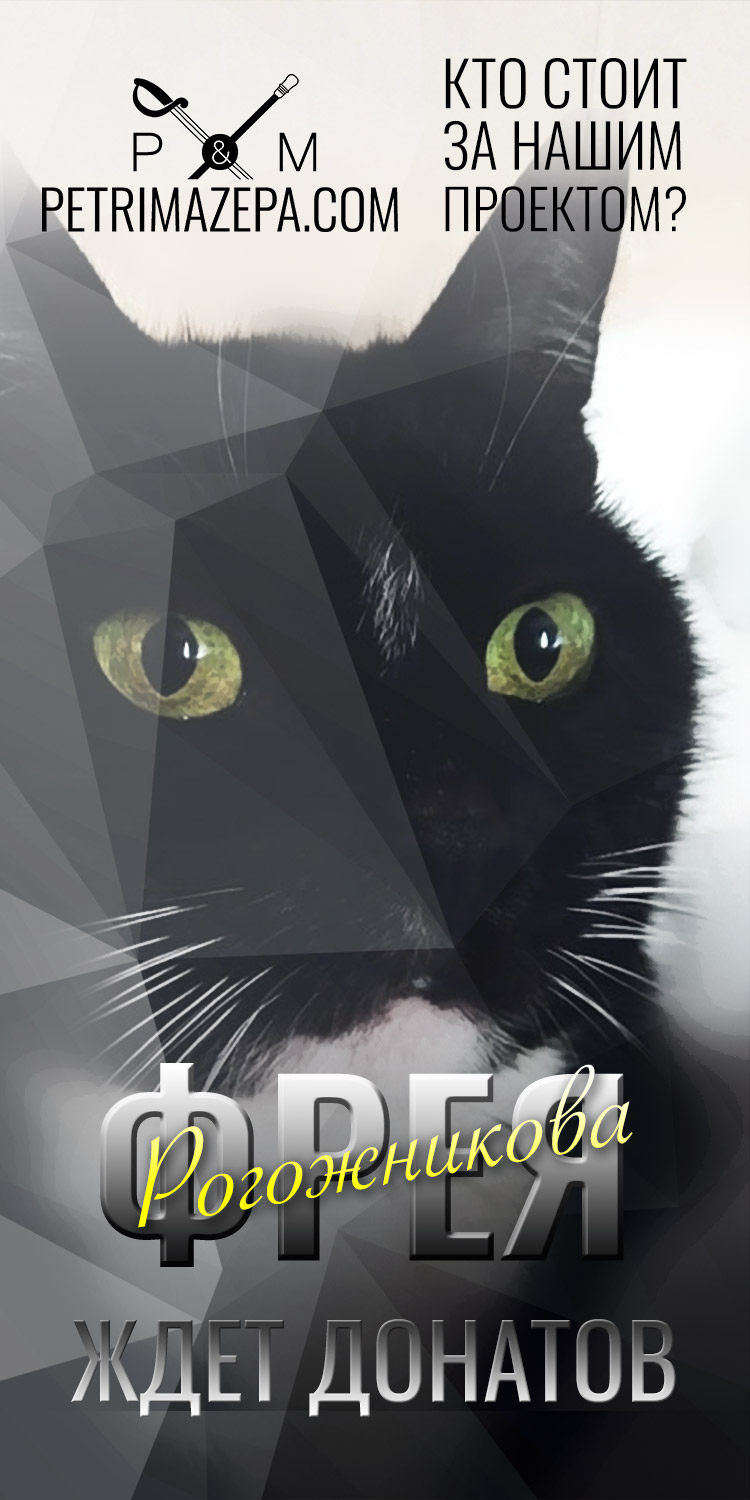