"Fascists". Part 2. Extremists, oh so many extremists around...

On the use of the theme of extremism in a hybrid war.
#
Russia
misinformation 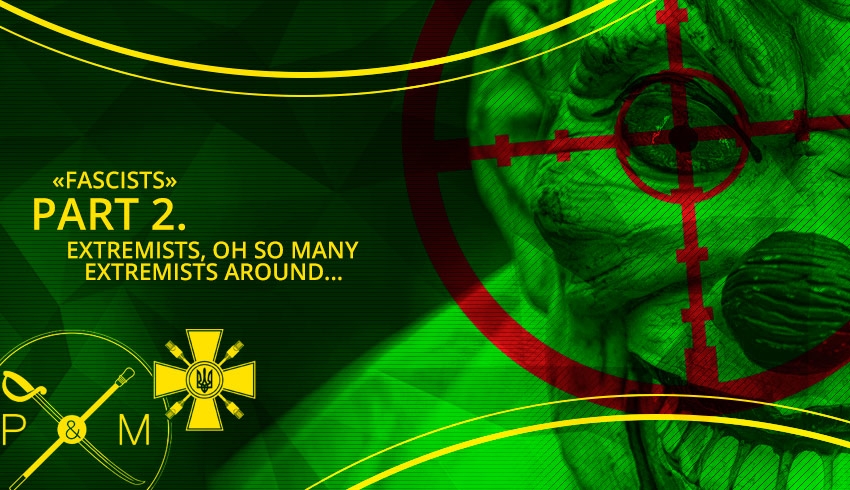 The author of the report was Viacheslav Likhachov, an expert on right-wing groups in Ukraine and Russia. Commenting the report to journalists, he said that he based his interpretations of events on observations of right-wing organizations: "In my opinion, these organizations act in a certain way partially because Ukraine has entered the pre-election period, and ultra-right must somehow manifest themselves. In addition, they have a very narrow electoral field with a very strong internal competition. In the event of the possible unification of the three main ultra-right forces (Svoboda/"Liberty", "Right sector" and "National Corps") in one block there will be competition for places on the joint list of candidates running for parliamentary elections. And if the main ultranationalist forces decide to put up separate campaigns, they must attract as many supporters as possible from similar parties. And in this field, of course, they must be more active, aggressive, more political for the media than their rivals. Therefore, I believe that this is partially explained by the election situation, and partly by a certain feeling that they lose the opportunity to proceed on a democratic way ", - said Likhachov.

At the same time, the expert excludes the possibility that the activities of ultra-right forces are directed from the Kremlin. "I am not a supporter of conspiracy," says Likhachov in his interview.

We, too, are no conspiracy supporters, but the experience of observing the processes that are taking place with human rights organizations in Russia, as well as their existence while being recognized as foreign agents, gives rise to certain very specific considerations.

The aforementioned Mr. Likhachov has worked successfully in Moscow for some time. And in April 2014, he even prepared a report for the "Moscow Bureau of Human Rights" (MBHR) on the growth of xenophobia and anti-Semitism in the territory of Ukraine. 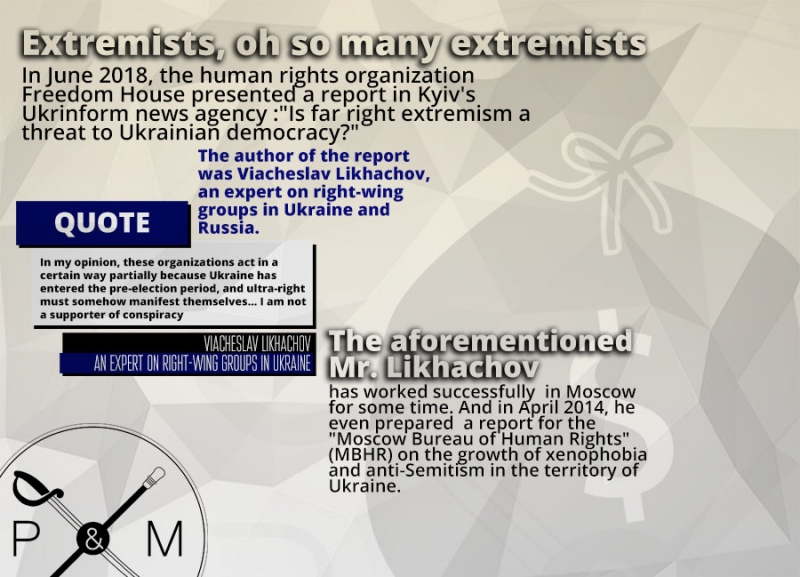 The April of 2014 was marked by the unfolding of Russian aggression against Ukraine in the Crimea and the Donbas. Accordingly, Russian media used theses of Nazism, fascism and violence on the territory of Ukraine as an explanation and legitimization of this undeclared aggression by the Kremlin.

In Sevastopol and Simferopol, ordinary Ukrainian citizens sat in kitchens with knives and baseball bats in their hands, waiting for the mythical "trains of friendship", packed with Right Sector guerrillas. Russian central TV channels talked about Dmitry Yarosh's fake post, in which he allegedly called on the Chechen terrorist Doku Umarov (who was deceased at the time) to unite in the struggle against the Kremlin.

Under such specific circumstances, the MBHR decided to publish its report on the growth of xenophobia and anti-Semitism in Ukraine. The subject was immediately picked up by propaganda media. Director of the MBHR Oleksandr Brod, a member of the Council under the President of the Russian Federation for the Development of Civil Society and Human Rights, was presenting the report.

The State News Agency of the Kremlin, RIA Novosti, even organized a special video bridge Moscow - Tel Aviv for this case. "As for Ukraine, we prepared a report with Viacheslav Likhachov, a well-known expert on anti-Semitism, who runs between Kiev and Jerusalem. We presented this report here, showing that anti-Semitic manifestations have been occurring everywhere in Ukraine: in the West, in Kyiv and in the East. We are talking about desecration of synagogues, of monuments related to the Holocaust, of the attack on the Hasidim and other representatives of the Jewish community ", - Brod said during a video bridge.

Later, Brod spoke in support of Russia's actions in the Crimea and the Donbas using the standard Kremlin formulations: "A coup d'etat was committed by the opposition, radicals, neo-Nazis and other criminals in Ukraine. All the actions of the so-called new government are illegitimate. Radicals are to blame for floods of civilian blood. Country is in a chaos, and there exists a threat of genocide of Russians, our compatriots. "

It is not known whether his opinion was supported by Viacheslav Likhachov or the representatives of Freedom House, who paid for his research work and presentation of the report. However, the fact that the MBHR in 2014 actively began issuing out a hybrid analysis of "violation of human rights by the Ukrainian regime" was noted by many researchers. One of them was Katerina Smagliy, who prepared the report on Hybrid Analytics.

Materials related to the "problem of neo-Nazism in Ukraine" come out very regularly. It is possible to say that this happens much more often than media coverage of any other issues related to Russian aggression against Ukraine. Only in November 2018, in the world's authoritative media, there appeared a few major articles devoted to creating a certain impression of Ukraine as a state dominated by violence and ultra-right nationalism. Initially, a Belarusian journalist, Yuras Karmanau, has published his investigation into "murder camps for children" on the pages of the Associated Press.

In the summer of 2018, he personally attended several summer camps, where ATO veterans who personally participated in repelling Russian aggression against Ukraine, lectured teens on how to handle weapons and instill discipline. Sure, learning how to protect yourself in a warring country - sounds wild for western media, right?

Of course, instructors who tell children about the war can be held on their words. What, in fact, Belarusian journalist did. However, this is not the whole story. The Russian narrative sounds like "the Ukrainian state supports the neo-Nazi ideology." Therefore, these processes must necessarily be tied to official organs. This was done.

Yuras phoned the press secretary of the Ministry of Youth and Sports of Ukraine Natalia Vernigora and asked her to comment on the information he obtained. Apparently, according to journalists from foreign publications, this is also absolutely normal for a country that is trying to protect itself from aggression in the information space and where there were repeated occasions of prankster provocations - normal to discuss sensitive information by phone with everybody who says he’s a journalist.

The journalist refused to visit the department in person, yet he wrote in his article that the Ministry of Youth and Sports of Ukraine is funding special camps where children are taught to kill. Naturally it became a sensation ... And in Ukraine as well

As a result, it took a few weeks for the editor of the European office Associated Press Niko Price and the head of the Moscow office, Kate de Piedi, for whom Juras Karmanau formally works (what a surprise?), to arrive in Ukraine. As a result of the discussion, the Associated Press published a correction in which it noted that "the camps where children are taught to kill do exist in Ukraine for sure; but journalists have not found any proof that they are financed by the state..."

In general, the narrative is clear.

Almost simultaneously with the appearance of Karmanau’s material Radio Liberty also published an article by Christopher Miller - a journalist who lives and works in Kyiv. In his materials and Twitter publications, Christopher mercilessly criticizes Ukraine for both reform and corruption, and for issues related to LGBT, freedom of speech and even the "Ukrainian crisis" (which is how he calls Russian aggression). He did not become an exception this time, when he spoke in detail about the increase of neo-Nazi spirit in Ukrainian society.

In early November 2018, a scandal broke out in Italy after a fight involving two young people in the Roman subway. On the video from the scene, it iv visible how two young people attacked a passenger. Russian and pro-Russian media in Ukraine immediately put responsibility for the incident on Ukrainians, stressing that the outrage of Ukrainian radicalism has already spread to European countries.

Interestingly, the scandal appeared in news stories just when the attention of the audience had to be diverted from the history of dozens of drunken citizens of the Russian Federation, who created an emergency situation in the subway of the Italian capital and broke the escalator.

People's Deputy Dmytro Timchuk, commenting on these incidents, said that the video footage was published by Facebook user David Ognibene. It shows that two young people were aggressive against one of the passengers. The young people were then detained by the police, but there is no data on the identification of their personalities. "It remains a question whether these two comrades made a dirty show in the subway specially for the camera, in order to discredit Ukrainians and Ukraine in general in Europe. It should be noted that one of them has deliberately stressed the fact that he was a "fascist". Why? "- asks the People's Deputy.

However, this video, in a strange way, instantly flew through Russian propaganda resources; it was immediately picked up by the entire bot-farm with the appropriate support: "Ukrainian racists", "Ukrainian fascists", "Ukrainian Nazis", etc.

Dmytro Tymchuk also noted the fact that the incident in Rome with the participation of supposed Ukrainian fascists has occurred at a time when a trial began in Italy over Vitali Markiv, a former military serviceman of the National Guard, who was accused of involvement in the death of an Italian journalist who was in the Donbass outside established accreditation procedures. But the Italian media reported the first information to appear was that 23-year-old Russian Nazis have attacked a 28-year-old Indian in the subway. And the woman who rushed to protect the Indian was a 57-year-old Ukrainian, who got her forehead cut by assaulters.

In the future, the Russian fantastic series on "Ukrainian fascists" will continue. This does not overturn the obvious facts of the emergence and development of right-wing organizations in Ukraine, which are becoming more prominent. But is this the reason for supporting the manipulative narratives of the Russian side, which have clear goals and objectives for audiences in the countries of Europe, Russia and the occupied territories of Ukraine?

The next parliamentary elections will show the truth, and undoubtedly, political parties with a right bias will participate in them. There, we will be able to see if the Ukrainian voter supports the right ideas, and whether the society does really support radical ideas. And the facts of racial and nationalist violence can be found in every country in Europe.