No investigation of information sphere of occupied territories will not lead to desired results. And that’s why. 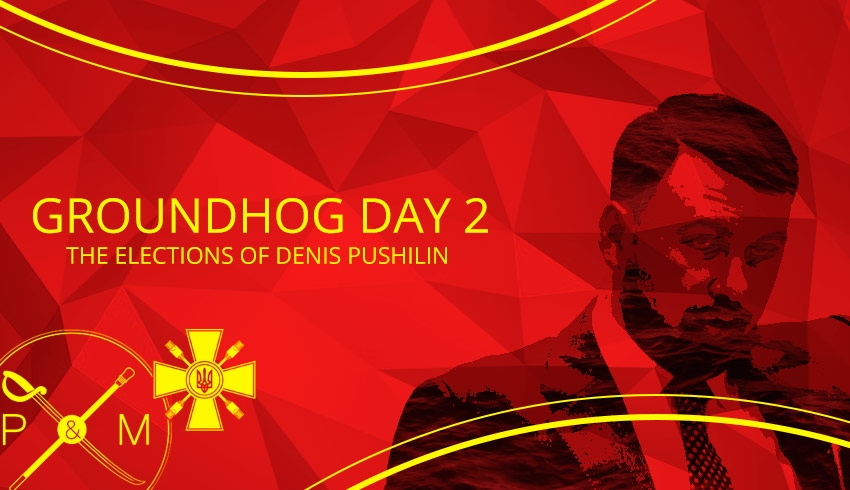 A short explanatory note of the current state of events on the Russian-occupied territories of Donbass can remind you of that old movie, where protagonists again and again wakes up into very same day filled with very same events.

This time citizens of Donetsk and other cities under control of the Kremlin political strategists waked up, at least for a second time, I a period when the construction of quasi-political situation in the unrecognized republics is left to Vladislav Surkov. Journalists and experts who cover the situation in occupied territories consider this to be a victory of Putin’s adversary over Federal Security Service, a victory over the control of all the fund sources which feed the Kremlin-controlled enclave.

Many authors, not only Ukrainian ones, tried to analyze the management structure of the so-called Donetsk and Lugansk People’s Republics. You can find a lot of “conscientious separatists” in social media who were tactically removed from any uncontrolled activity on the occupied territories. Harboring a great resent against their former patrons, these are eager to share their opinions and insights into how exactly the “desperate miners of Donbass” are broken into shape with the total propaganda in the media.

It would be hard to overemphasize the importance of the control over the media in the unrecognized republics. That’s why a huge number of organizations were created in these territories, each aiming to dictate the agenda. Starting with a number of purposely dis-informational media belonging to the infamous Pavel Gubarev, and ending with occupational government structures, such as “Ministry of Information”, or even a Gebruary 2018 founded so-called “Russian Center of Donetsk People's Republic”, headed with the already mentioned Pushilin.

By the way, a remarkable structure. So called “Russian center” in mere 6 months of its existence was impressively active in all kind of fields and areas which were able to produce any news content of non-political nature, from karate championships to nature photo exhibitions.

Kremlin secured the financing of many “Russian center” events in Donetsk and in different cities of Russia, funding the visits and delegations in Moscow, Yaroslavl, Rostov-on-Don etc. And of course the main character in the news stories related to the “Center” activities was Denis Pushilin himself.

This is but one evidence to the fact that this obedient puppet was prepared to sit in the chair of the head of occupational administration, long before the elimination of Aleksandr Zakharchenko took place.

Yet these attempts are futile for one simple reason. Management processes in Lugansk and Donetsk People’s Republic are mostly following the management system created in Russia. The main trait of system like this is: the official or quasi-official structures responsible for certain management functions in reality are not the centers where decisions are made.

For example, a so-called Ministry of Information of Donetsk People’s Republic is nothing but an organization existing mostly on the paper, the main task of which is to follow orders, and perhaps solve some technical tasks such as issue accreditation to a journalist, or to deny the issuing of such.

In reality, the last events of the election campaign of the puppet-like Denis Pushilin proved once again that the emissaries from Kremlin are behind all the decisions made in Donetsk. And what’s interesting, the official Kremlin is past the stage of trying and hide this.

One of the core speakers on Pushilin’s election campaign for Russian media was Alexey Chesnakov, a head of the Center of Political Conjuncture, who’s in fact is just a talking head for Vladislav Surkov.

Center of Political Conjuncture serves to Surkov’s interests for quite a long time now. Back in 2005 the Center published a 74-page paper on “secutiry forces involved into property takeovers in Russia”. The subjects of this critical report were few of Surkov’s political opponents in Kremlin: I. Sechin, V. Ustinov, V. Ivanov and N. Patrushev.

Being basically the unofficial speaker to Surkov, Alexey Chesnakov in recent time gave a few interviews to some big Russian online media, such as RIA “Novosti” and “Interfax”, and he also talked about the main reasons why these elections are so necessary, even though they are endangering the future of Minsk agreements, and would not be recognized by anyone, including Moscow itself.

Among the rest Chesnakov mentioned two emissaries from Surkov, codenamed “Chaika” (“Seagull”) and “Patriot”, were sent to Donetsk to ensure the successful run of election campaign and getting the necessary voting results. “Novaya Gazeta” immediately reacted to these statements with their own article, quoting their own sources in political elite of Donetsk, stating that some “Sergey Anatolievich” and “Dmitry” supposedly hiding behind the “Patriot” and “Chaika” aliases are indeed conducting meetings and present tasks related to election process. 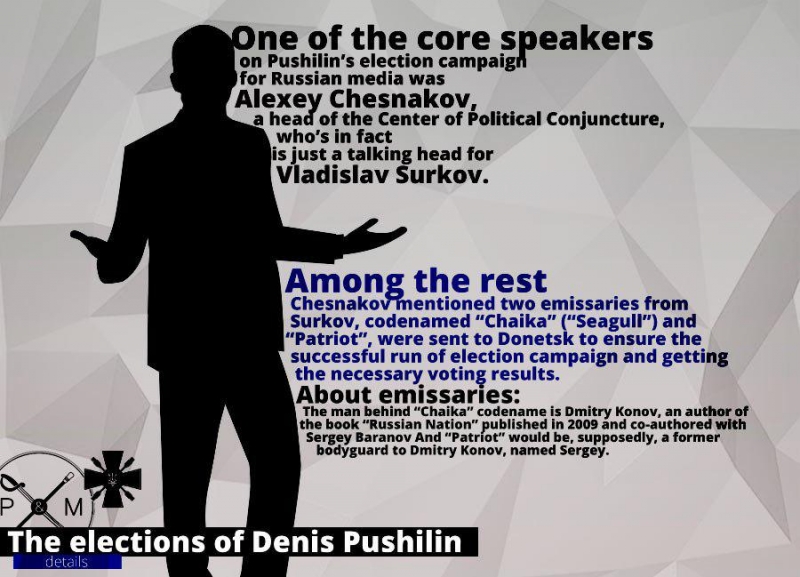 Chesnakov also talked about his boss Vladislav Surkov rise in power. It’s connected to the Putin’s edict of October 2th 2018, which secures the re-organization of Surkov-curated Department of Administration of President in questions of cross-border cooperation. Apparently, the purpose of this reorganization is to informally cement that this department will now be in charge of all quaetions related to Ukraine and occupied territories.

According to Chesnakov, once the edict will be signed by Vladimir Putin, the man in charge of Donbass occupied territories will be Alexey Filatov, replacing Maxim Polyakov who apparently was a man of Sergey Kiriyenko. Polyakov was known in Donetsk under the codename “Polyarnik” (“Polar explorer”). The aspects of Minsk agreements process will be under control of Alexey Dmitrievsky. Oleg Markovich Govorun, Surkov’s protégé from early 90s, was appointed as a head of reorganized department.

According to the information of “Novaya Gazeta” (which has no objective evidences yet) the man behind “Chaika” codename is Dmitry Konov, an author of the book “Russian Nation” published in 2009 and co-authored with Sergey Baranov. And “Patriot” would be, supposedly, a former bodyguard to Dmitry Konov, named Sergey.

Besides, “Novaya Gazeta” suggests that the one supervising the elections on behalf of Russian Federal Security Service will be lieutenant-colonel Mikhail Yuzhanin, which is peculiar, especiually considering the fact that Federal Security Service’s activities were the reason why Surkov was removed from overseeing the matters of Donetsk People’s Republic for quite a long time.

Re-incarnation of Surkov as the overseer of Ukraine-related processes raises a lot of questions. Because this is an interesting outcome from the fight between Federal Security Service and Main Intelligence Directorate of Russian Federation, the fight between which continues from the start of protest activities in Ukraine in late 2013.

Vladislav Surkov traditionally comes on the side of Main Intelligence Directorate in this fight, if anything because it was Federal Security Service which got carte blanche for actions in Lugansk and Donetsk People’s Republics after 2014. Which again looks strange, considering the latest fails of Russian Main Intelligence Directorate all over the world (Skrypal poisoning, an interview of Bashirov and Petrov, an arrest of Russian agent in Austia, etc.). Apparently some formula for even-steven influence was found.

Some experts suggest one possible explanation of what’s happening, remembering the least prominent person in the Pushilin’s theatre play, Alexander Evgenievich Ananchenko, which was appointed by Pushilin as a head of the government of Donetsk People’s Republic. Nothing is known about this man. Where he came from, what’s he doing. Even his year of birth was named as 1967 or 1954.

There is only one publically accessed photo of Ananchenko. 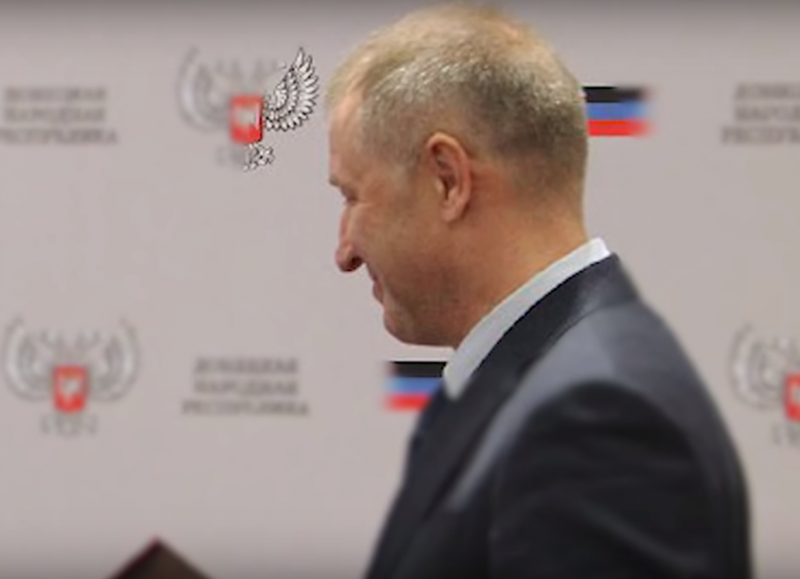 And only one fact of his bio can shed a light into where he came from. We know that previously Ananchenko was a councel to the head of “Vneshtorgservis” company, owned by a runaway Ukrainian oligarch Serhiy Kurchenko. And in 2017 “Vneshtorgservis”, a company registered in South Osetia (another unrecognized enclave under supervision of Surkov) got control of main industry and manufacture plants of Donbass occupied territories.

In turn, some sources connect the current ceaseless activity of oligarch Serhiy Kurchenko with a Sergey Beseda, a right hand of the head of Russian Federal Security Service.

Thus, we can suggest that the imaginary chain of command of finances and economics of the occupied territories looks like this: Ananchenko – Kurchenko – Beseda.

A model of balance of power and interests like this may make sense in some circumstances. A political aspect of “Ukrainian department” is formed by a chain of Pushilin – Chesnakov – Surkov (with the support of Main Intelligence Directorate). And the financial and economic aspects, with a full control of financial flows in the region is controlled by a chain of Ananchenko – Kurchenko – Beseda (with a support from Federal Security Service).

Elections as a way to cement the status quo

Of course the elections of Donetsk People’s Republic ringleader will not lead to any consequences at all, even though Chesnakov proclaimed them as a “way which will help to avoid the chaos”.

A great number of thinking people, including the ones holding anti-Ukrainian position, know precisely that they are being played. Too many of them know exactly who is Denis Pushilin. Yet all the questions of political and economic nature in this region are decided in Moscow exclusively, and they couldn’t care less about the people voting.

There will be no suspense during elections, because all the real competitors to Pushilin were pushed out long before the election campaign start. SO what is this spectacle for, and not a cheap one, made from concerts and events and forceful gathering of thousands of people to hail Pushilin?

After getting the official positions and indulgences in Kremlin, it is vital for Surkov to cement his status quo on the territories supervised, through the controlled people. That’s the reason why he transferred the control of financial and economic sphere to Federal Security Service, to assure them that he has no interest in money. And in turn, he got the opportunity to control the agenda in context of the future Minsk discussions.

We do not know what this really cost to Surkov, and what will bring him in future. But we can be sure that this question is settled on the level of Vladimir Putin and it’s now a matter of implementing it.

Because of this, we must accept that no investigation of information sphere of occupied territories will not lead to desired results, as most of the decisions are made in the manual control mode, and depending from the required funds and budget. It is not important exactly who will be the owner or the manager of the infrastructure used to broadcast the information to the masses via TV, radio or Internet. Because any administrator will just follow the orders of Moscow emissaries, which will dictate the context and the agenda.

Of course there is no freedom of speech or multitude of opinions on the occupied territories, there is no and there can be none. Of course the elections are nothing but a comedy which serves to one single purpose, to fulfill the obligations to Vladimir Putin after his important personnel decision.

“Elections without the choice”, as this was already named by Donbass residents, is nothing but a formal cementation of the status quo of true Donbass masters. And operation coined long before the death of Zakharchenko, and a one which cynically ignores the true interests of people in Donbass region. 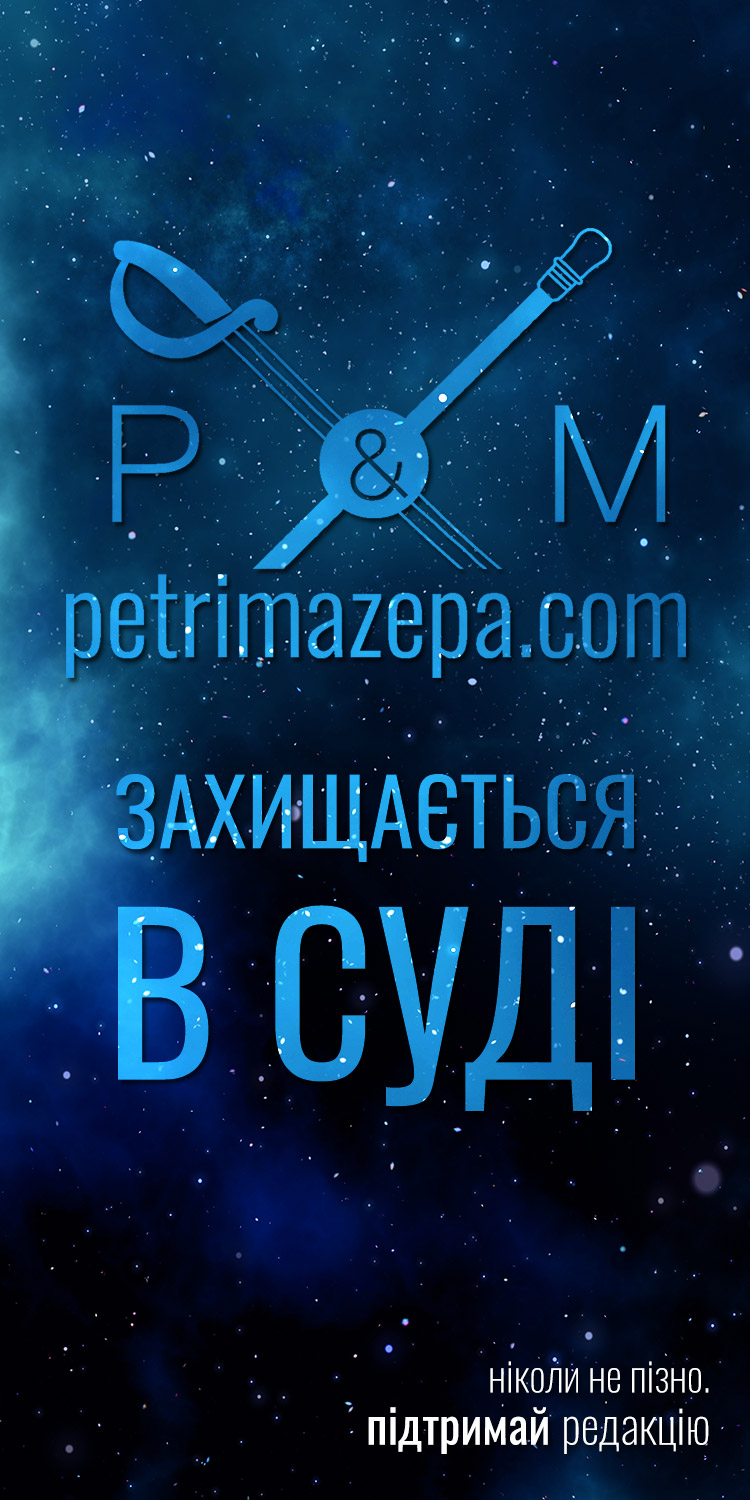