How to Join NATO: Five Rules of Montenegro

Recipe for victory in a hybrid war. A set of necessary actions, compiled and already tested by Montenegro.
#
Montenegro
hybrid war
Russia
NATO 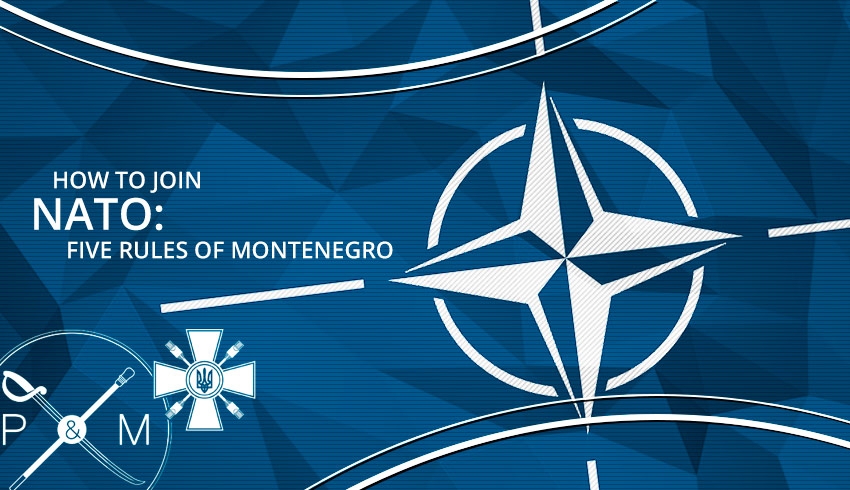 Montenegro had to sustain the hybrid influence of Russia, but they managed

Since the first day of its restored independence in 2006 Montenegro declared its allegiance to the Euro-Atlantic integration. Back in 2007 the former Yugoslavian republic and European Union signed the Agreement of stabilization and association. In 2010 the country became an official candidate for joining the EU. A plan of actions on preparation to a membership in NATO Podgorica received in 2009. But it was only in spring of 2014, after the Russian annexation of Crimea and the start of war on Donbass, when Montenegro government voiced out its intentions on maximal speeding up of joining NATO and EU.

Now, after four and a half years, Montenegro can be proud of its undoubted successes. In June of 2017 the country became 29th member of NATO and currently is the most real candidate for joining the EU, way ahead of candidate #2, Serbia. That’s despite the fact that the process of European integration of Montenegro was accompanied by the active hybrid opposition from Russia in all spheres and in all directions. That means, informational attacks, economic pressure, activity of pro-Russian political powers and even a scenario of forceful coup and change of power.

The start of hybrid opposition between Podgorica and Moscow was in spring of 2014.

After the annexation of Crimea and the start of hybrid war on the east of Ukraine, Montenegro immediately and without hesitations joined the European Union sanctions against Russian Federation. Montenegro president Filip Vujanović stated that Montenegro, as a candidate country, must implement the foreign relation policy in coordination with EU and NATO. At the same time the prime minister Milo Đukanović unveiled the plans of Podgorica to join the NATO as soon as possible.

The answer from Moscow came soon. 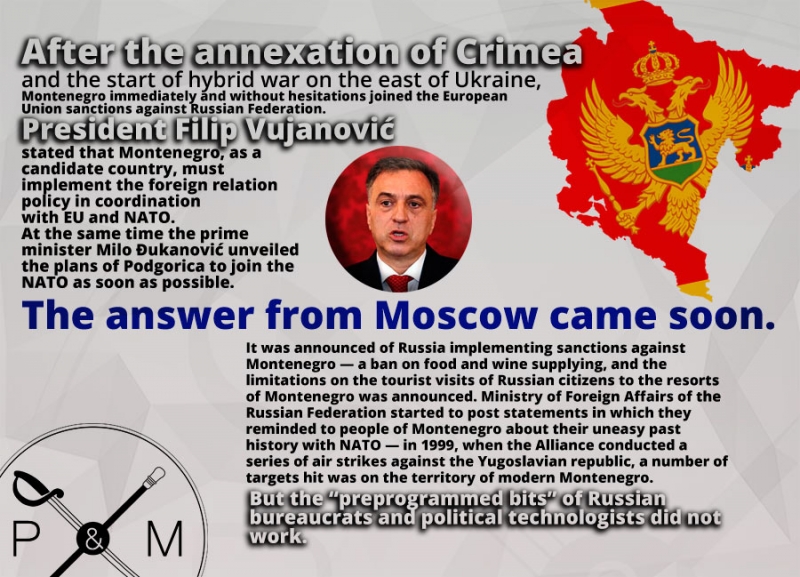 It was announced of Russia implementing sanctions against Montenegro — a ban on food and wine supplying, and the limitations on the tourist visits of Russian citizens to the resorts of Montenegro was announced. Ministry of Foreign Affairs of the Russian Federation started to post statements in which they reminded to people of Montenegro about their uneasy past history with NATO — in 1999, when the Alliance conducted a series of air strikes against the Yugoslavian republic, a number of targets hit was on the territory of modern Montenegro.

But the “preprogrammed bits” of Russian bureaucrats and political technologists did not work.

An appellation for NATO bombings missed the target, as Montenegro tuned out from Yugoslavia and Yugoslavian war both on official level and on the level of public perception, and presents the events of 1990s as something which happened in another country and with another country. As opposed to Serbians, Montenegro citizens do not think that NATO waged war against them personally in 1999. Also, Montenegro recognized Kosovo long ago, which was a reason for NATO operation being carried on, which is a good example of how official Podgorica sees those events — definitely not pro-Serbian and not pro-Russian position.

The sanctions against export of Montenegro products to Russian Federation also was of little effect. Evidently, these measures were not beneficial for the country, but the government did not change a course of the country because of them, and people and business did not insist on this. More even because another way of economic pressure on Montenegro, a “resort blockade” failed completely. Tourists from Russia basically ignored the calls of their own government, and continued to visit Montenegro. (A rare case when the “no politics” motto was useful and helpful.)

Another bet of Kremlin was a Russian diaspora. According to media, in 2014 in Montenegro (mostly in the coastal area) over 7000 of Russian citizens lived (over 1% of total population of the country, which totals to approx. 650 thousands). At that moment Russians owned approx. 40% of coastal lands on the shores of Adriatic Sea, and the wielders of Russian passports owned up to 70 000 apartments and houses.

Everything indicated what Moscow was hoping for — that a solid presence of Russian citizens will be a big help to keep the small Balkan country in the orbit of Russian influence. But Kremlin had some issues with this.

First of all, only a little number of Russians cared to get a Montenegro passport, so few of them could actually and legally affect the political life of the country. Second, the denizens of Montenegro resort towns with Russian passports simply wanted to keep living with “no politics” in their lives. According to the witnesses, even a number of former important Russian law enforcers and military brass on pension behaved the same.

A traditional bet on the Russian media propaganda didn’t secure the necessary effect just as well.

Media conducted an intensive campaign against Montenegro joining the NATO. A number of scary stories were created about the possible future of the country. But it wasn’t possible to influence the public opinion in Montenegro directly through the Russian media. Some local Russians were outright angered with such propaganda, as it threatened their tourist business. And as of the Montenegrin, they simply did not know the Russian language, as viewing the news is not just the same as exchange a few words with a tourist. For a long time, since the fall of Yugoslavia, Russian is not studied in Montenegro in a mandatory way. The second language in Montenegro is English (almost all the school graduates of last years speak it fluently, and a good deal of general population), the third languages are German, Italian… But not Russian. So the translation of Russian channels on cable networks did not affect Montenegrin much.

And as of local Montenegro media, it became clear that the leaders of local media market are the media which work according to the “standards of journalism” (in a good sense) and which support the pro-state positions. And this is not limited to a state media company Radio Televizija Crne Gore, which mostly support the government and the state. That also includes the largest media holding (a TV channel and a newspaper) Vijesti, which covered (and does cover) the activity of the opposition (including pro-Russian) in great detail, which produces the critical investigation stories against the corruption in government, but does not slide into a propaganda, does not publish the commissioned stories, and does not translate the anti-Montenegro messages.

There are some other local media in Montenegro — but they are much less popular, and cannot compete with the media leaders.

Of course, one should not diminish the influence of Serbian media onto people of Montenegro. But the leading media of the country which is a partner of NATO (yes, we mean, Serbia) was not eager to translate the openly anti-NATO propaganda, even more so to aim it on the neighboring country.

To some degree the role in campaign for Montenegro not joining NATO being not successful played the fact the main “force” of Russian propagandists on Balkans, a Serbian version of multi-media agency “Sputnik” started its work only in 2015. And even though “Sputnik” immediately started to translate the Kremlin scary stories about NATO aiming for Montenegro audience, they failed to change the minds of population.

In the same 2015, a new ambassador of Russian Federation was appointed to Montenegro.

Almost immediately, since the autumn of 2015, the situation became tense. Opposition started to come out with protests immediately, and one of such actions (in October) even ended in the violent confrontation with police. Even though protests included the representatives of different political powers, which demanded a change of government for different reasons, the main force beyond the protests still were the anti-NATO protesters, organized by you-know-who. Enough to say that marches and meetings of the opposition in Montenegro capital were held under Serbian and Russian flags, with slogans like “Not to NATO!”, “Putin!”, “Long Live Russia!”.

In December of 2015 Montenegero, after getting a formal invitation from NATO, started a negotiations of joining the Alliance. And in October of 2016, in the day of parliament elections voting, in Podgorica an attempt of coup happened.

At the evening, after voting stations were closed, opposition intended to have the meeting near the parliament. The insurgents, dressed in the uniform akin to the uniform of Montenegro special forces, intended to infiltrate the building and to stage the shooting of the participants of protest. Another group of mutineers intended to capture the prime minister Milo Đukanović.

This is how the force change of power should have had happened, and consequently the change of foreign policy. But on the eve of D Day Montenegro special forces uncovered and arrested the rebels. (It should be mentioned that one of the most complicated tasks which Montenegro was in need to solve before joining NATO, was eradicating the Russian agents from law enforcement structures. Apparently, they succeeded.)

The leaders of the action were revealed: one high-profile Serbian official, and Aleksandr “Sasha” Sinjelich, who was spotted before in Crimea together with the “green men”, and amidst the combatants of Donetsk and Lugansk “People’s Republics”. Sinjelich started to cooperate with the investigation and to testify. It was revealed that the organizers of the coup were a members of Russian special forces. Later it became known that those were the agents of Main Directorate of the General Staff of the Armed Forces of the Russian Federation, under the names of Eduard Shishmakov and Vladimir Popov.

(It is characteristic that Russians living in Montenegro, when knew about the news, demonstrated their radical disagreement with the events. About two hundred of Russian citizens, including the well-known in Ukraine political technologist Marat Gelman, who lives in resort city Budva since 2014, signed and spread in media the letter condemning the attempt of the coup and the interference with Montenegro matters.)

As of today, the trial of the coup continues. As continues the activity of pro-Russian opposition, two of which leaders, Andrija Mandić and Milan Knezević, are accused of organizing the coup, while their colleague Nebojša Medoević, listed as a witness. In last days opposition organizes mass protests, putting forward a lot of accusations, demanding the change of power and helding the early elections. A formal cause for protests is not NATO, or coup trial, or relations with Russia. But it would be naïve to suggest that Russia has nothing to do with events — Mandić and Knezević are a regular visitors on Moscow cabinets. Apparently, Russia is still hoping to bring back the good old days when Montenegro was loyal and “brotherly”, as opposed to being pro-West and a member of NATO.

Still, Montenegro people have all chances to sustain this test, because they already have found a recipe for win in hybrid war.

Here’s the list of necessary actions, already tested and tried by Montenegro, a simple and quite short one list:

- A firm, uncompromising, permanent and united Euro-Atlantic course of all the government powers.

- A sober, pragmatic approach to history and the future of the country, both between ruling elite and between large parts of ordinary citizens.

- An ability fort strategic thinking amidst large number of citizens, which are ready to sustain a temporary hardships to reach the set goal (sustain sanctions — for joining EU and NATO).

- An absence of foreign (Russian) agents in the law enforcing structures.

- Private media, supporting the government positions. An absence of media which would be disloyal to the country, or which would work against the interests of the state — at least the absence of such amidst the popular and credible media.

- Loyalty of majority of population to the country they live in. Including the ones with the passports of other countries (Russian Federation).

Montenegro succeeded to implement all these points. But it is extremely hard to repeat the same in another place and under different conditions…