How to Make Human Rights into Hybrid War Weapon. Part 2

We have here the second part of the material on the use of human rights in a hybrid war. Recall the OSCE 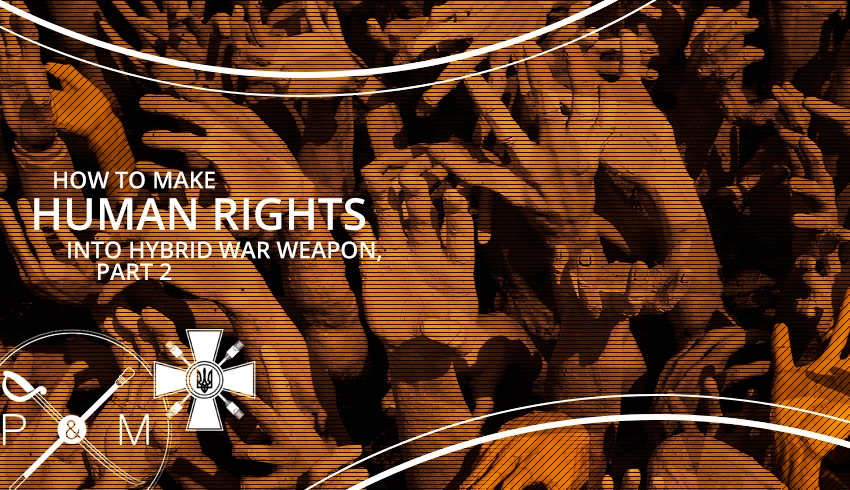 There is a characteristic trait of modern Russian in its actions on the international arena — it is to use the democratic mechanisms to undermine the very democracy, and on a global scale. That’s why Kremlin tries to maximize its presence on the international platforms, to promote its interests. Including those platforms which goal is to discuss the problems of human rights, which intensified in 2018.

One of the loudest cases of Russia using the international platforms would be the OSCE Human Dimension Implementation Meetings in Warszawa at September 10th to 21st, and we already mentioned the Russian demarche which had a place there in one of the articles. But a usage of international platforms in such manner to promote the narrative of human rights violations in Ukraine — is a long-time instrument of Russia in the hybrid war.

OSCE and the Agents Inside of It

At the beginning of the conflict in 2014 Russia apparently didn’t have a comprehensive plan on spreading the propagandist narrative about the human rights violations in Ukraine on the international scale. As we already wrote in the article about fake activists from Russian Federation, one would only be able to point out the translations of “hybrid analytica” of these organizations by the “institute of Democracy and Cooperation” in the beginning of 2014, and a few conferences which were organized by the same institution. The task at that moment was a different one — to persuade the western audience in the cruelty of Ukrainian army and volunteers on Donbass, which was something the propagandist machine worked on.

But the situation began to change in the first half of 2015. As The Ecnomist pointed out, Russian Federation made a transition in rhetoric from the messages akin to “Ukraine is a neo-Nazi state” to the narratives in the vein of “Ukraine is failed state, which cannot pay its debts and breaks the international norms”. And if Russian audience, being quite used to a propaganda trash of 2014, wouldn’t be much surprised with such fake news, the international audience revealed itself to be more resistant to propaganda. Not simple media story injections were required, but a more fundamental approach. So the path of using the international platforms on human rights questions was chosen, and Russian Federation tried to use each and single one of them within its purposes and goals.

The first case was during the OSCE Conference on Journalists' Safety, Media Freedom and Pluralism in Times of Conflict in the June of 2015. During this conference journalists of LB.ua media noticed that in addition to the OSCE handouts, some person was laying out the report named “War crimes of Ukrainian law enforcers: Tortures and inhuman treatment”. That was a propagandist libel, prepared by the “Foundation of Democracy Problems Studies”, and the person spreading the brochure was Maksim Grigoryev, a head of the Foundation, and the member of Civic Chamber of the Russian Federation. Again we already wrote both about this fake activist organization and of the Grigoryev hiumself in the story about the fake Russian activists.

During the next provocation Russia came up with a scheme which is still used — sending the separatist not known to Europeans, who was never present in the sanctions lists, to voice out the propaganda messages. That’s who Dmitry Polonsky, a “Minister of the Information Politics of Crimea”, who attended the OSCE conference of the Office for Democratic Institutions and Human Rights in the September 2015. His speech though was interrupted due to protest from Ukrainian delegation, which threatened to leave the conference is Polonsky will continue his speech. Aside from the goal of telling of “political repressions” in Ukraine, such actions also has a goal of “legitimization” of the representatives of occupation government on the international arena.

In next two years Russia was not able to repeat the same trick in Warszawa. The 2016 had no scandals, and in 2017 the “permanent representative of Crimea to President of Russian Federation” Georgy Muradov was held for over 2 hours in the airport of Warszawa, and was not able to speak on the conference. And in 2018 Ukrainian delegation once again prevented the speech of so-called “representatives of Crimea”: Anzhelika Luchinkina from the “Civic Chamber of Crimea” and the CEO of the propagandist TV channel “Milet” Ervin Musayev.

Still, both Russian diplomats and the representatives of the fake organizations from Russian Federation manage to work through their narratives, even though it doesn’t have a crucial influence on the European human rights discourse — also because of Russian being less and less perceived as a part of European human rights space. Which doesn’t solve the problem, of course. For example, on the yearl;y conference on human rights in Tallinn in December of 2017 there were no separate panel on human rights violations in Russia. As the author of Latvian media “Delfi” explained, “Due to its rhetoric, lately Russia is perceived in Europe in a quite distant way”, and also because of a quite peculiar understanding of the human rights activity in Russia — that “the government itself should be a human rights activists, and the Western human rights organizations are enemies”.

It’s Not the OSCE Alone…

IN 2018 Russia intensified its attempts to squeeze its representatives into the international forums and conferences, connected to the human rights topic. The goal is to spread the propaganda narrative not only about the “political repressions” against the pro-Russian activists, but also about (pay attention!) violation of rights of Crimean citizens by Ukraine. Also through the creation of illusion that Ukraine tries to cover up the information of the human rights violations, opposing to the presence of “Crimea representatives” and “independent activists” on these international platforms.

This new course apparently started with the statement of Aleksandr Pankin, a deputy to Minister of Foreign Affairs of the Russian Federation Sergey Lavrov, of how “Russian Federation will use the international platforms to counteract the US sanctions”. At March 16th Russian media was spreading the information of a supposed “disruption of the speech of Russian Federation representative regarding the violation of rights of Crimean citizens by Ukraine” on the United Nations Human Rights Council in Geneva. The reason would be “a strike of the UN Council office employees”. Quoting the Aleksandr Molokhov, a representative of the “Crimean Republic” for President of the Russian Federation, the media stated that supposedly Ukrainian delegation met the representatives of the union of UN Council employees. This sounds funny, given the context of Russia blocking the meeting of United Nations Security Council on the human rights violations in Syria, at March 20th.

While using the international platforms and international organizations, Russian Federation also remembered that European sympaticos can be used for the similar purpose. For example, “Die Linke” in Germany, with the help of which the round table on the “human rights and the freedom of media in Ukraine” was held in Bundestag at June 11th 2018, with the attendance of Olena Bondarenko, Ruslan Kotsaba, Leonid Kozhara, Olga Semenchenko from “Vesti” media, and Klimenko’s minions from the “Successful Watch” organization, which again was already discussed previously — and some other notable propagandists of Russian rhetoric.

At this event, Olena Bondarenko voiced out the message of “Five thousands of political prisoners in Ukraine”, which was first presented back in 2015 on the round table “The human rights in Ukraine: The current situation”, which was organized by the “Union of Political Emigrants and Political Prisoners of Ukraine” — yet another fake organization. A detailed analysis of this message, and why it was supported by the German “Die Linke”, as well as the analysis of the round table itself is provided by Gala Sklyarevskaya in her article on the “Detector Media”.

And as soon as June 20th, the “Successful Watch” held the event in Kyiv called “Political and human rights and freedoms in Ukraine”. Except of German “Die Linke” and Leonid Kozhara (who cannot visit Kyiv for objective reasons), the membership was virtually the same: Olena Bondarenkom Natalya Natalina, Valentin Rybnik, Ruslan Kotsaba. It was covered by “Vesti”, “Ukrainian News” media, and the media resource named “Anti-Fascist”.

But this was not an end to the parade of fake news and reports. At June 21st, during the 38th session of the United Nations Human Rights Council, an unofficial event was held “about the oppression of Ukrainian Orthodox Church of the Moscow Patriarchate in Ukraine”. The organizers of the event were a well-known fake human rights activists from the “Information Group of Crimes Against the Person”, “Russian Peace Foundation” and the permanent representative of Russian Federation at the UN headquarters. As we already mentioned in the story about Kremlin human rights activists, it had no direct connection to the UN as the organization, but it gave the Russian media an excuse to spread the fake news story of “UN condemning the repressions against the Orthodox Church”.

After that, there was a Human Dimension Implementation Meetings in Warszawa at September 10th to 21st, with the discussion of “Human rights and freedom of media in Crimea”, which was organized by the permanent representative of Russian Federation at OSCE, and a side event of the “Successful Watch”, mostly repeating the events held in Berlin and Kyiv at June 11th and 20th. In addition, Russia tried (and did not succeed) to fit the representative of so-called “Central Election Commission of Lugansk People’s Republic” into the United Nations Security Council session at October 30th. And at November 22nd the so-called State Duma of Russian Federation deputy from the annexed Crimea Ruslan Belbek stated that he “took part” in one of the events of the UN Forum on human rights, democracy and the primacy of law — later the representatives of the Ukrainian Ministry of Information Policy informed that Belbek was not making any speeches and did not make any statements.

Just as with the “hybrid analytica” of fake Russian activist organizations, the attacks of Russian Federation on Ukraine at the international platforms have the main goal of diverting the attention from their own violations. Not with rebuttal of alleged violations, but through the imposing of the message “if you don’t believe to us, you should not believe to Ukraine either”, as Emine Dzhepparova said discussing the conclusions of the Warszawa conference of September 2018.

Less than two weeks before the conference, the permanent representative of Canada at OSCE the ambassador Natasha Keyer made a statement of the activation of so-called Vienna mechanism of OSCE regarding the Russia, for the investigation of the mass violations of human rights with the support of Chechnya political powers. So once again we can see the familiar Russian trick — to cover up the allegations against itself with the creation of the media background of fake stories about the human rights violations in Ukraine. And that didn’t help much — in November, with the initiative of 16 countries, the so-called Moscow mechanism was started, to investigate the situation with tortures in Chechnya.

Aside from the standard filling of information space with the information beneficial to Russia, the cases of Russian speakers infiltrating the international events are also needed to create the “alternative reality” for Russian population. As in: see for yourself, the sanctions are not really working, our representatives visit the UN and OSCE conferences freely, it’s not long until the annexation of Crimea will be recognized. The only thing in this approach is doubtful: it only works as long as the international organizations need to adapt to the new reality, created by the Russia. As soon as this will happen, Russian propaganda will be forced to search some new ways to defame Ukraine and Western countries.