Kiselyov Show: The main vulnerabilities of the media space

It's time to talk about Russian propaganda. Actually about its weakness. 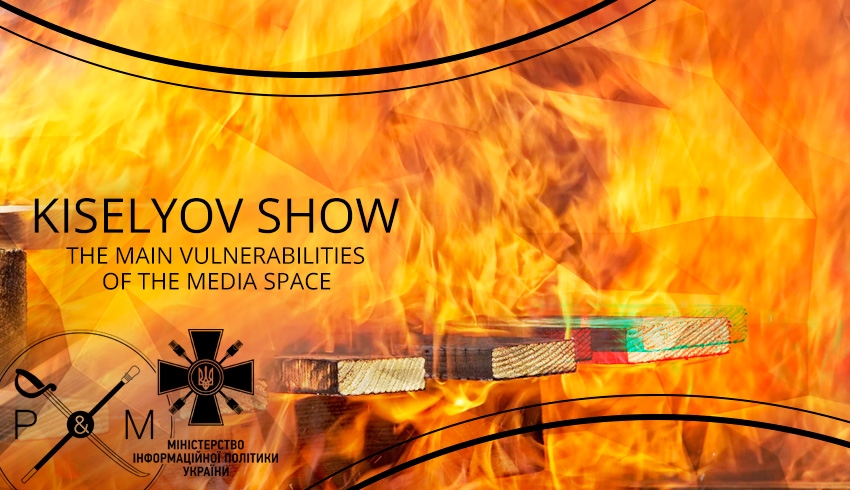 Ukraine is often blamed in freedom of speech violations or restrictions, even though the country is under hybrid and military aggression. We often hear such accusations from public organizations, some of them affiliated with infamous Party of Regions. We also hear some accusations from the members of international organizations who do not quite understand the context and background of what’s happening in Ukraine.

Of course this is something hard to understand for those Ukrainians who clearly know: we confront the Russia, which doesn’t even have any real freedom of speech, and who uses its media, and powerful ones, as simply yet another branch of armed forces. Still, every single next time we must this seemingly indisputable fact must be proven again and again.

We are not surprised to hear the calls for “business as usual” realtions with Russia. That’s why it is so important to remind to the world and to European Union in particular about all the crimes Putin’s Russia committed, not only against Ukraine and international community, but against their own people just as well.

It’s hard to argue against the fact that Russian mass media is under total control of Russian president, no matter if they belong to government or Putin’s friends. But not much people remember how this happened. More even, there is a popular opinion that throughout his first term as a president Vladimir Putin was a “good” Putin. In reality, the journey of the Russian leader to his current state and place was a consistent one, and it started right after his coming to power. Back in year 2000. Back then, in one of his interviews, Putin clearly stated his resentment about the media, when he said, “Do you think it feels nice to sit in Kremlin and read all those mean things journalists write about you?”

Then the Kursk submarine tragedy happened, and a famous Putin’s interview with Larry King, that’s when Putin made his joke about the disaster taking 118 lives, when the host’s question “What happened with the submarine” was answered with “It sank”. That was the moment Putin understood the necessity of taking all the independent media under control. Kremlin had a vast arsenal of means to do this, be it criminal proceedings against the media owners, or a legal wrangling, or seizure of property. For example, the criminal case against Vladimir Gusinsky, the owner of the NTV media company, was opened in the summer of 2000, and in November the Public Prosecution Service decided to arrest him, thus effectively forcing him to leave the country. But that was just a start of the NTV fight. In year 2001 the company was taken over by force, and this operation was led by one of Anatoly Chubais associates, named Alfred Koch. Despite the mass protests in Moscow and St. Petersburg, despite the public support actions for the team of the NTV channel, the company became to degrade, rapidly, and soon was nothing but a part of Kremlin propaganda machine we see nowadays.

Then it was a turn of ORT, or Public Russian Television channel. Oligarch Berezovsky was stripped off his company shares, he was forced to emigrate, his friend and partner Konstantin Glushkov was arrested in connection of Aeroflot company case. If such things were done by a private citizen, we would call this raiding, which is clearly a criminal offense. But that was done by a Russian head of state!

It was not enough for Kremlin to simply seize the media assets. It was vital to set restrictions to free speech at the legislative level. As a pretext and excuse for this the hostage taking in Dubrovka theater center was used. And in November 2002 the State Duma approved the changes to the laws of mass media and counter-terrorism, which increased the responsibility of media for publishing of information considered to be classified by the security service. The rumors were, Kremlin was outraged by the talk show “Freedom of Speech” by Savik Shuster, where one of the guests, Mark Rozovsky, the father of a girl who was taken hostage, voiced out the demand to pull back the army forces from Chechnya to save the hostages. After this, the show never was live on the air again.

So who controls Russian media now? One of the big one players would be a national media group belonging to Yury Kovalchuk, who owns the blocking stake in First TV Channel, 72% of the shares of 5th Channel, 82% shares of RenTV. Aside from this they control Russian versions of Discovery and Aurosport channels. Gazprom Media owns such TV companies as NTV, TNT, TV3, Friday, 2 x 2, Match. Back to First channel, almost 39% of its share belong to government, and 24% belong to Roman Abramovich company. Government also owns the All-Russia State Television and Radio Broadcasting Company, with all its subsidiaries. And thus the Kremlin monopoly over television is complete.

It might seem that mass media in the modern Russia look much as media in Soviet Union, but it’s not the case. And it’s not about the formal disctinctions.

First of all, the censorship in modern Russia spreads out only to political aspects, that’s why to the untrained eye the media may look as a quite free one. And even in the political questions Kremlin tries to create an illusion of pluralism, by letting out on the screens some representatives of Ukraine, who are carefully selected, and often are not well known or completely unknown in Ukraine itself. Some representatives of Western world can be seen, some liberal politicians. Experts know well that only those speakers can appear on the screen who feel fine with the role assigned to them, but that works fine to create an illusion of multitude of opinions. 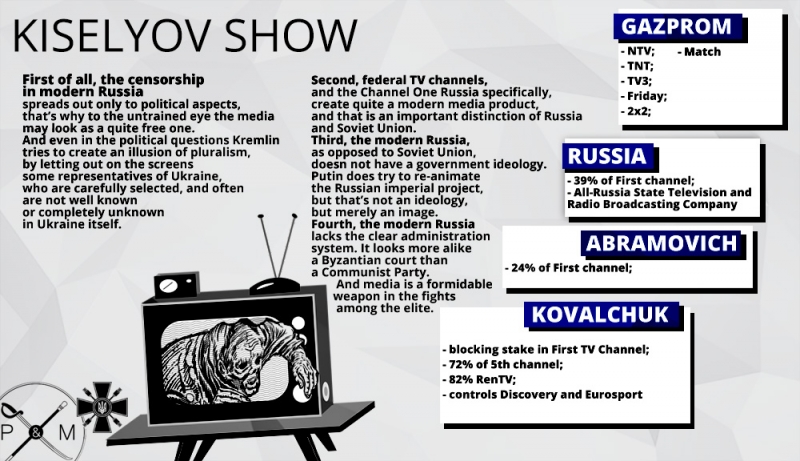 Second, federal TV channels, and the Channel One Russia specifically, create quite a modern media product, and that is an important distinction of Russia and Soviet Union.

Third, the modern Russia, as opposed to Soviet Union, doesn not have a government ideology. Putin does try to re-animate the Russian imperial project, but that’s not an ideology, but merely an image.

Fourth, the modern Russia lacks the clear administration system. It looks more alike a Byzantian court than a Communist Party. And media is a formidable weapon in the fights among the elite.

All this leads to the fact that despite its apparent power and invincibility, the Russian propaganda machine has quite a lot of weak points.

Perhaps the main quality of Russian propaganda is its shallowness and superficiality. That is the reason why talk shows, no matter which TV channel they are at, look more than a market brawl, with all brawl attributes present — screams and shouts and curses and even fist fights. Definitely looks less than a discussion by experts and politicians. That’s what makes them vulnerable. To win in the media war you must come up with a media product of high quality. Ideally it should surpass the quality of opponent’s product in all the aspects — not only its contents, but the appearance, the presentation, the viewability. Modern Russian propagandists are nothing but big fat Internet trolls, and you must remember that you can’t win over troll with trolling. You must win over them with your intellect, and it is possible in the case of Russian propaganda. For this, you need to understand the topics where those propagandists feel strong, and the ones at which they are weak.

Vladimir Putin tries to reanimate a completely archaic model of the state. That’s why all of his interests are outside the country. That’s why his propaganda is constantly discussing the foreign politics, and noone know what to do with domestic affairs, especially when some problems appear. Right now, when Putin’s rating of approval falls as low as in year 2011, and when United Russia party the governor elections in many regions, they try and steal the attention of their electors with a proven trick, a militarist hysteria. In his late night show Vladimir Solovyov spends over three hours discussing how and when NAto will attack Russia, and the World War Three will start. What was the occasion? The NATO exercises in Norway. And even the presence of the Russian observers did not stop Vladimir Zhirinovsky from promising the war not later than June 22th 2019.

The easiest way to discuss the work of Russian propaganda is to open the Soviet-issued manual on special propaganda in the wartime. All those methods which should be used against the enemy in the times of war are used by Russian Federation today against its own citizens. “Rotten herring” method, “40 to 60” principle, “Big Lie”, “It is obvious that…” — all these are especially dangerous because they are based on deep psychological mechanics, and the consequences of such traumatizing actions cannot be countered with any kind logical argumentation. These were the methods used by Kremlin propagandists to create the story about “crucified child”, that’s how they covered events of May 2nd 2014 in Odessa. Result of such informational impact is the “zombification” of the audience, when a person which was submitted to propaganda not only spreads this information further, but also reacts aggressively to any alternative point of view. It is only natural that the consequence of all this would be a heightened level of aggression in society, and there’s more aftereffects to this.

Lately, the Russia (including territories, occupied by it) is drowning in more and more cases of unmotivated violence. The Kerch shootout is just one of the examples. A female citizen of St. Petersburg reported running from an unknown who saw her on the train stop and tried to puncture her head with a shank. A deputy of one of the departments of Ministry of Economics shot his neighbor dead after an argument. In Kemerovo region a senior citizen shot his sons from a shotgun. These are few news headlines in last week alone! When we say that people in Russia went nuts, it’s not that far from truth, and this is a result of impact of wartime propaganda.

Still, Kremlin propagandists have a lot of weaknesses. Virtually any internal Russian problem can be weakness. You can simply check their reaction to the lost governor elections, or their reaction to Ingushetia conflicts, or to Alexey Navalny street actions. In most cases they simply try and minimize the media effect from what’s happening. Their favorite method is a shift of attention. Sadly, we often help them to do this, when we spread the showy topics, but ones which are completely meaningless and safe for Kremlin. Again you cannot troll the trolls. Not possible!

And here comes another handy message from Kremlin which we often see in Ukrainian media space: we don’t care what happens in Russia. That’s when there’s lots of topics which propagandists try and avoid as much as they can, that would be relations between Moscow and regions, and the decline in living standards, and rise in unemployment, and salaries going down, and utility prices going up — that’s just to name a few sensitive subjects. A good articles in these subjects could fill up the informational vacuum. Information warfare, just any other, calls for the serious evaluation of the enemy. And the enemy is Kremlin propagandists which are at war not just against Ukraine, but also against the Russian citizens, trying to make them into obedient puppets to use to Kremlin’s advantage.