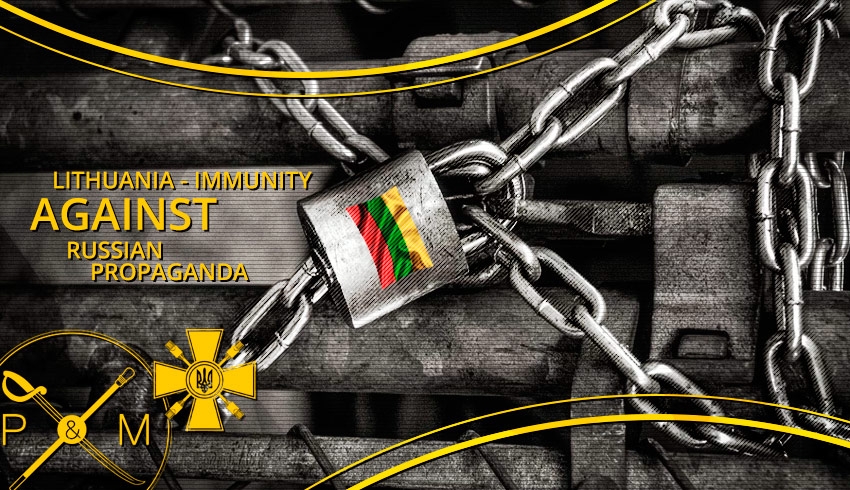 Relations between Lithuania and Russia have traditionally been difficult. Thus, Lithuania became the first Soviet republic, which declared its independence and marked the beginning of the collapse of a superpower. But if in the 1990s Russia was still considered by Lithuania as a close ally, then with the coming to power of Putin, everything changed. War in Georgia was caused by the war in Georgia in 2008, and since the beginning of the Ukrainian crisis, after the annexation of Crimea in 2014, the country finally turned into a state of heightened distrust towards its northern neighbor. According to a survey conducted by the Ministry of Foreign Affairs, almost two thirds of the population consider Russia to be the most dangerous and unfriendly state among neighboring countries. Almost every fifth resident of Lithuania fears a Russian invasion at all.

And the information fight continues again ...

But it would be fundamentally wrong to assume that Russia has abandoned its intentions to fight for Lithuania. From the point of view of the geopolitical location of all the Baltic states, Lithuania was probably the least fortunate. It is sandwiched between the Russian exclave of the Kaliningrad region and Russia's ally Belarus, and its capital Vilnius is located right on the border. Lithuania’s entry into NATO further routed Russia. She transferred tens of thousands of soldiers armed with air defense systems, artillery, missiles and tanks to the Kaliningrad region and the Western Military District. A large-scale Russian military exercises "Zapad", in which about 100 thousand soldiers participated, showed that Russia considers Lithuania as the most important element of the NATO military strategy. According to legend, the Russians worked out the combat task of liberating the territory of Belarus, which NATO would allegedly occupy. However, the Lithuanian leadership believes that in fact, during the exercises, the seizure of Lithuania was simulated. During the exercise, one of the training tasks was to take the Suwalki corridor, in which NATO strategists see the geographically weakest place in the Baltic region. This is due to the fact that in this case there is a danger that the Russians will be able to adjust the supply of Kaliningrad by land and cut off the Balts from the rest of the alliance. And the alliance does not have the means to counteract this, since the Russians around Kaliningrad have about 60 warships at sea, and they can actually close the southern part with their air defense systems. Since last year in Lithuania there are 1.2 thousand soldiers under the leadership of the Bundeswehr, who provided 500 of his own military personnel. The support of the presence of NATO in Lithuania is enormous, while Russia, by contrast, is far from being inspired by the increased presence of NATO troops.

After the NATO troops appeared in Lithuania, the Russian propaganda machine earned all its might. Moscow communicates its message to the inhabitants of Lithuania through state and pro-Russian news and entertainment programs. As many as 60% of the television cable channels available in Lithuania are Russian-language programs that reflect Moscow’s policy and point of view, despite the fact that only about 12% of the country's population of 2.8 million people speak Russian. Misinformation is also distributed through the state Russian news agency Sputnik and social networks.

It should be noted that since the elections in the USA in 2016, Russian disinformation operations have become more sophisticated than ever. In recent years, incidents classified today as a “hybrid threat” have constantly occurred in Lithuania. These are hacker attacks on government networks, cyber attacks on the energy and banking sectors, the appearance of fake news.

So, shortly after the transfer of the first troops to Lithuania, a false report appeared that German soldiers allegedly raped a young girl, but the story did not make any impression in Lithuania. In the Lithuanian media, another false story spread by Russian agents of influence was exposed: the alleged American military vehicle shot down a child to death during a recent military exercise in Lithuania. This story seems to have some development in social networks, until it was exposed. It is clear that the main purpose of the fake "stuffing" was to discredit the NATO presence in Lithuania.

Fake news from Russia touched on representatives of all branches of government, such as, for example, Lithuanian Defense Minister Raimundas Karoblis. So, as a result of a hack, Russian hackers from a Lithuanian news site spread false rumors that Caroblis was gay and accused of sexual harassment.

Now the main informational trend of Russian propaganda is the promotion of a false story that denies the very right to the existence of the Baltic states. Thus, the pro-Russian media actively disseminate information that Klaipeda (the third largest city in Lithuania), allegedly, never belonged to the country, and this was Stalin’s gift after World War II. Another informational “stuffing” - the capital of Vilnius should not belong to Lithuania, because it was occupied by Poland between the first and second world wars. Of course, Russia uses this history as a pretext to destabilize the situation in the region. 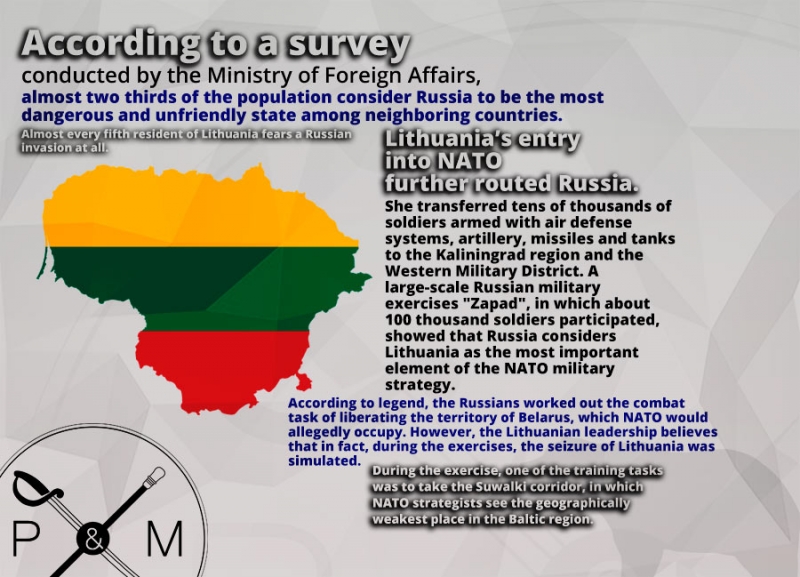 If we consider that Russia is not only building up its already significant combat potential in Kaliningrad, but “in order to counter a possible attack from Europe” places three new divisions in the European part of Russia and two air bases in Belarus, this is not a formal, but about the real threat. In such circumstances, Lithuania rightly fears that the campaign, aimed at rewriting history, may be aimed at preparing the ground for a possible attack, as was the case with the Russian justifications for annexing Crimea in March 2014 and the invasion of the Donbass. Then the Russian functionaries invested a lot of time and energy in the creation of the Crimean propaganda myth, which included the revival of the term from the tsarist era “Novorossiya”, used to describe the regions of eastern Ukraine. This word was used by Putin in 2014 and was intended to confirm Moscow’s right to use military force against its neighbor. LDPR leader Vladimir Zhirinovsky generally believes that the eastern part of Lithuania should move to Belarus, and the western part to Russia. Fake accounts on Facebook repost maps of the Baltic region, where on the site of the Republic of Lithuania are similar to the terrorist organizations of the DPR and LPR in Ukraine, created by Moscow with the support of local separatists. Although these “cards” seem absurd to specialists, ordinary citizens are poorly versed in such things and with the “right” progress they can look very convincing.

The main enemy of Russian propaganda is Lithuanian President Dalia Grybauskaite, who bluntly voices the truth unpleasant for the Kremlin. At the end of September 2018 channel "Russia 1" was delivered by a whole half-hour "documentary" under the unambiguous title "Mistress of Lithuania". In half an hour of airtime, Russian propaganda fighters managed to cram both a rally for Lithuanian independence against the EU and NATO, and the dominance of homosexuals (they remembered the LGBT parade in Vilnius), and the famous conspiracy theory about the pedophile clan in Lithuania ", and" Russophobia ", and emigration as an indication that Lithuania is falling into decay. The mentioned film is, first of all, remarkable in that it can be viewed as a kind of anthology of modern Russian propaganda directed against the “decaying West” in general and Lithuania in particular.

Similar information campaigns circulate both on Russian television and on social networks: Kremlin leaders question the right of the Republic of Lithuania to exist and try to convince the audience that the rights of the Russian-speaking population are allegedly oppressed in this Baltic country.

The Baltic countries came under the influence of Kremlin propaganda much earlier than most other states. The problem of the harmful information impact of Russia is already being discussed quite widely in such states as the USA, Germany, France, Ukraine, Poland, and Hungary. And Lithuania is familiar with this danger firsthand.

However, does this mean that Lithuania is more resistant to the harmful information effects of the Russian Federation than other Baltic countries?

According to the rating of the resistance of the states of Eastern and Central Europe to the Kremlin propaganda, which was prepared by the analytical centers "Ukrainian PRISM" (Ukraine) and "EAST Center" (Poland) among the Baltic countries, Lithuania is leading in the area of resistance in relation to the influence of the Kremlin propaganda on the population. This is due to several factors. First, unlike in Latvia and Estonia, there are not many Russian-speaking residents in Lithuania (12%). Secondly, the Lithuanian information space is less sensitive to the channels of Kremlin propaganda. For example, in the TOP-10 of the most popular television channels of the country, only one channel connected to the Russian information space has reached - the First Baltic Channel, which occupied the last line of the rating.

The study also showed that Internet media spreading ideologically biased information, such as Baltnews or the Lithuanian version of the notorious Sputnik, are not popular in Lithuania either. Lithuania also practices a temporary blocking of the broadcasting of Russian television channels in cable networks in cases where it is possible to catch these channels in violation of the laws of the Republic of Lithuania. The most frequent such violations are war propaganda, (especially in the context of Ukrainian events), and the use of hate speech. Recently, local authorities have already suspended the broadcasting of four TV channels due to their propaganda threat to national security.

Summing up, it can be argued that Lithuania has managed to form the relevant structures, which are now professionally engaged in combating Russian propaganda. At the same time, the struggle is fought not only at the state level - civil society itself begins to fight this phenomenon. A key tool in the fight against pro-Russian disinformation has been the training of Lithuanian citizens on how to identify and filter the propaganda products of Moscow.

And the hope is that after Grybauskaite’s resignation from the post of Lithuanian president in mid-2019, her policy toward Russia will change significantly - most likely from the realm of fantasy. Lithuania is too close to Russia to close its eyes to the manifestation of the Kremlin’s aggressive policy towards its closest neighbors.

Therefore, if in some countries of Central and Eastern Europe there is again a shift towards Russia, then in Lithuania this is unthinkable. 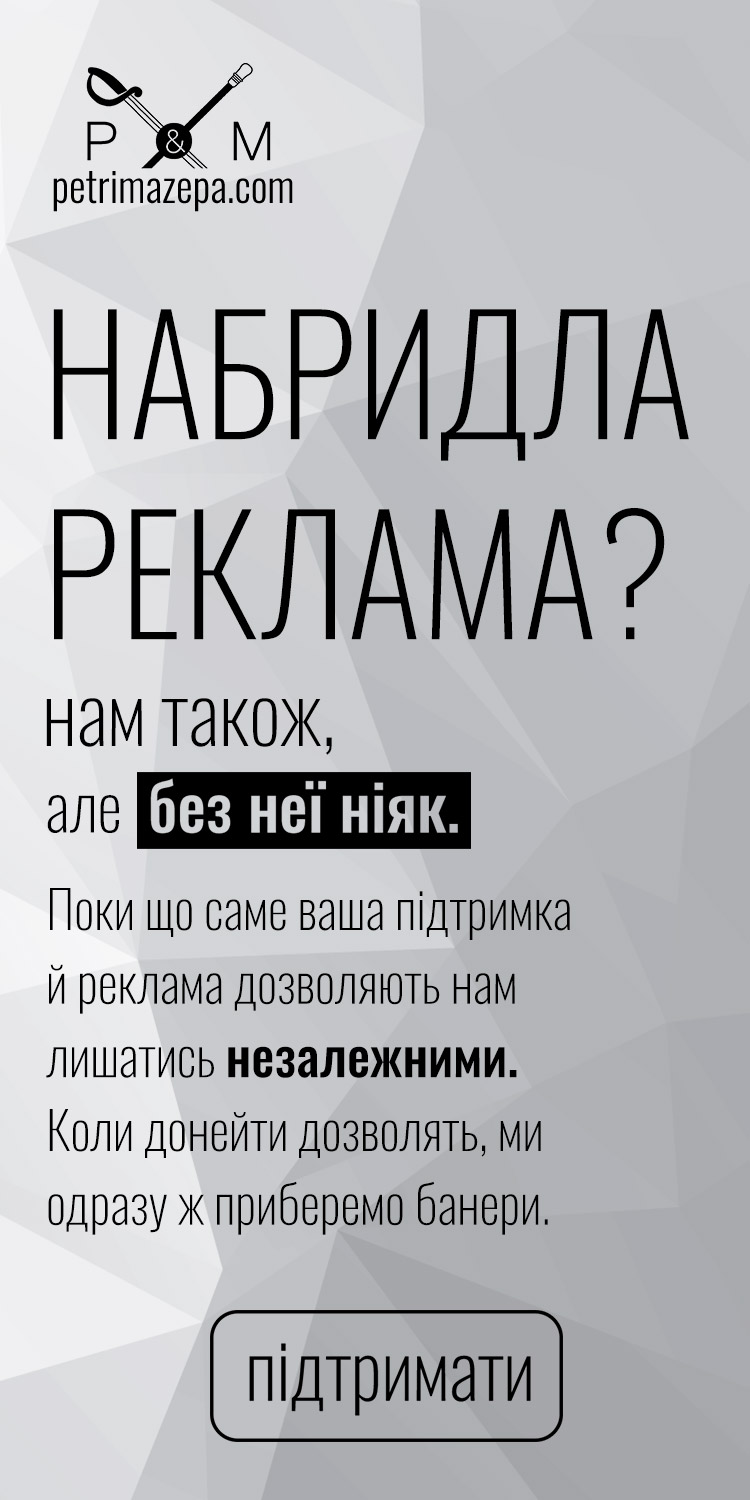