Pity as a Hybrid Weapon

And to another kind of hybrid weapons. Pity. And the case of Yuliya Samoylova on the EuroVision as a perfect example. 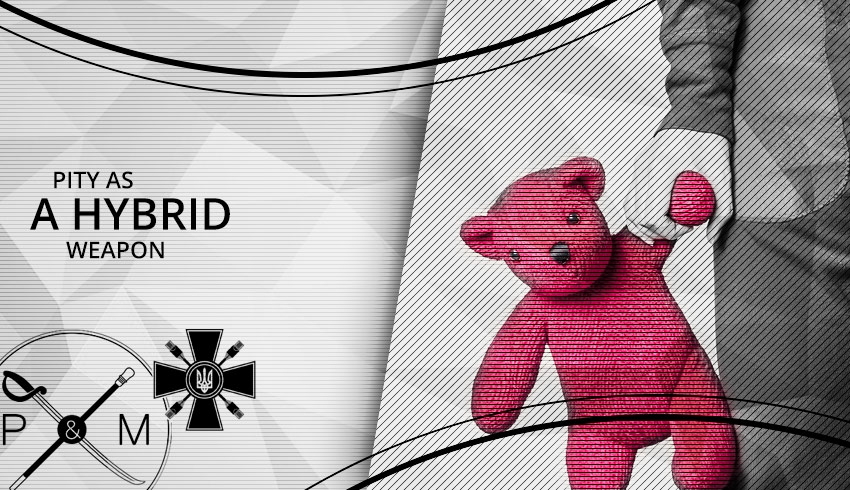 Do you remember the scandal with Russians sending a disabled girl singer on the Eurovision — Yuliya Samoylova, which previously did some touring in the occupied Crimea? Let’s analyze it as an information operation.

In Ukraine we already got used to the fact that Russia has no scruples whatsoever when it’s about of defamation of Ukraine. For this Russia has no issues of cynically using a socially sensitive questions, covering its information operations with the ethic agenda. The perfect case is an attempt of sending the disabled singer Yuliya Samoylova on the EuroVision 2017 contest in Kyiv, while being perfectly aware that it will not be allowed into country due to her past performances in Crimea. So, exactly that happened.

This attempt to pose a legal question for the question of ethic should have made an average Ukrainian to think, whether they live in the oppressive state, and to make Europeans think whether they support the right side of the conflict. But due to the oversights of Russian propagandists things did not go as planned.

Let’s remind of the true reasons for Samoylova being denied the entrance to Ukraine. In 2015 she entered the occupied Crimea through the territory of Russia, to perform in Kerch. This is prohibited by the law of Ukraine “Of ensuring of rights and freedoms of citizens, and the legal order on the temporary occupied territories of Ukraine” of May 6th 2014. According to the law, foreign citizens can only cross the border by the special permission through the control points of entering and exiting. Samoylova broke this law.

And it’s not about her political position — which might have been a reason for denial of entrance, as Russian singer supported the Russian annexation of Crimea and spread the message of the friendship of “brother nations” together with pro-Kremlin artists. Its much simple, as any first-year student of the law school can explain — the norm in the disposition was violated, so the sanction is applied. But Russia was not interested by the legal side of the question, as there were no discussions in the vein of “unlawful nature of the law”. The goal was completely different: to stage the loudest scandal possible around the human rights violations by Ukraine, while directing the attention to the fact of Samoylova’s disability.

As Pavel Kazarin pointed out in his article for “Krym.Realii” about this situation, Russia have sent a disabled girl in Ukraine with the one purpose only — to create a scandal. Perfectly understanding that Ukrainian laws do not allow Samoylova to enter the country, because of her performances in Crimea, thus Kremlin demonstrated its readiness to use the supposedly questions of morality to create a schism in Ukrainian society.

It appears that the staging of the scandal started few months before the contest itself. At March 4th in the “Minute of Glory” TV program the performance of disabled dancer Evgenii Smirnov (he has a leg amputated) was criticized by the members of jury Vladimir Posner and Renata Litvinova. Pozner called the absence of the dancer’s leg to be a “below the belt” trick, meaning — in a situation like this the dancer cannot be said “no” to him. Litvinova went even further, calling Smirnov to be an “amputee” (which sounds more derogatory in Russian than it does in English), and advising him to “strap the prosthetic leg, so the disability would not be noticeable that much”.

This case could be seen as a sign of degradation of Russian TV shows, and hardly anything more. Unless one thing. At January 31st Russian media, quoting the Kremlin media agency “Life.ru”, informed that the administration of the “First channel” approved Aleksandr Panayotov as a representative of Russian Federation on the song contest. Even in the short list of possible candidates Samoylova was not present, neither were any mentions of her taking part in the contest in any kind, until the March 12th when it was announced about her going to Kyiv. All this gives reasons to consider that the show played by Pozner and Litvinova was nothing but a “preventive information injection”, to undermine the possible following discussion that “Russia plays the pity card”.

At March 22nd Security Service of Ukraine informs of Samoylova being denied the entrance to Ukraine, which predictable causes the storm of outrage in Russian media. “StopFake” project made a compilation of most vivid reactions by Russian media, government institutions and famous people. For example, this is an official commentary of Ministry of Foreign Affairs of the Russian Federation regarding Samoylova’s denial of entrance:

“The current Ukrainian government once again proved their image of the regime poisoned with rusophobic paranoia and nationalist complexes.

Using the Security Service to prohibit the entrance to Ukraine of the Russian representative on the EuroVision 2017 contest, Kyiv apparently was scared a lot by the fragile girl. With this, they not only demonstrated their political inferiority and weakness, but also their true feelings about the European values. The top priority was not a decent level of hosting the song, let us emphasize, song contest of EuroVision, but the eagerness of turning any event which Ukraine takes part in into a politicized anti-Russian coven.”

It went as far as the (plagued with spelling mistakes) letter from the European Broadcasting Union (EBU) head addressed to Ukrainian prime minister Volodymyr Groysman, threating with exclusion of Ukraine from “future events” of organization, unless the Security Service will change its mind regarding Samoylova. Which though made little effect.

A peculiar fact is that the topic of human rights were mostly discussed by the people from Russian show business — say, producer Iosif Prigozhin and Yana Rudkovskaya. First was saying that Russia should stop taking part in EuroVision, and complained about European tolerance, which “puts the bearded woman over the person in the wheelchair”; second one was claiming the fact of human rights violations and the necessity of filing the claim to the European Court of Human Rights 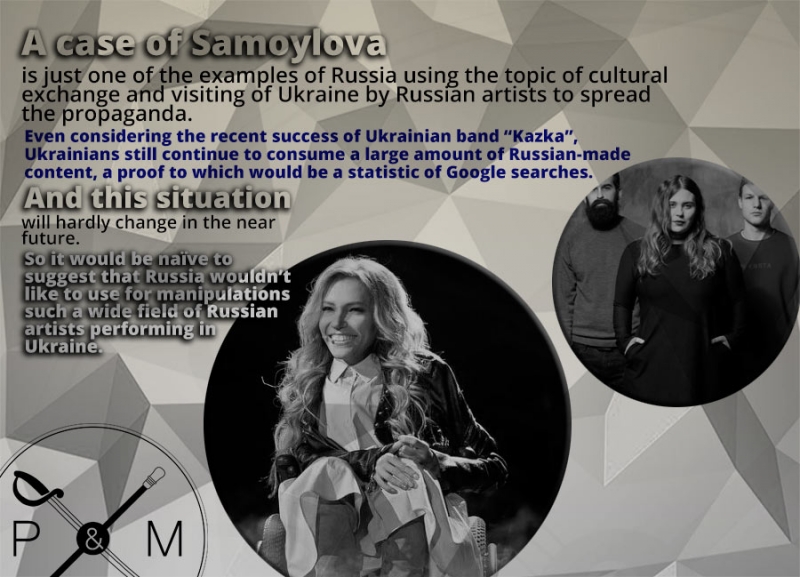 For a completeness of its narrative of “giving the chance to a fragile girl”, Russia decided to send Samoylova again to the EuroVision 2018 in Lisbon. Any questions of the motivation of this decision were answered to by Samoylova herself in her interview for “The People” YouTube channel. She told that in 2018 “noone from her team considered the possibility of winning in the song contest”, and that in 2017 she was chosen for EuroVision “not just like this”: “They’ve needed a character with particular qualities… or the deficiencies, I don’t know how to say this”. She also said that “First channel” have cut the spending on her performance for the EuroVision 2018, and claimed that the preparation of it was “a hack job”, while she was forced to solve many issues by herself.

The final chord of all this Samoylova’s drama show can be considered her statement at September 5th from the Sheremetyevo International Airport, about her being ready to emigrate to Europe. Of course, the Internet was immediately stormed by the outrage (the video of her statement got 302 thousands views, while the “RIA Novosti” publication for 335 thousands).

Later it became known that Samoylova did this to draw the attention to the problems of a mother, whose child is suffering from the same illness as Samoylova does. But Russian society already had a chance to show how tolerant they are, including one of the main Russian propagandists, “RIA Novosti”, which were not beneath of showcasing the negative commentaries of noname users of social media — even though they’ve added a few positive ones.

It would be hard to invent the more colorful example of using of a disabled girl in the purposes of Russian propaganda.

A case of Samoylova is just one of the examples of Russia using the topic of cultural exchange and visiting of Ukraine by Russian artists to spread the propaganda. Even considering the recent success of Ukrainian band “Kazka”, Ukrainians still continue to consume a large amount of Russian-made content, a proof to which would be a statistic of Google searches. And this situation will hardly change in the near future. So it would be naïve to suggest that Russia wouldn’t like to use for manipulations such a wide field of Russian artists performing in Ukraine.

It needs to be pointed outright that one should not try and construct the theory about Russian conspiracy for influencing of minds of Ukrainians based on the concerts of just any Russian band or artist in Ukraine. The question is about the very particular category of the artists: those who openly promoted the anti-Ukrainian messages, or visited the occupied Crimea. Ignoring the facts of them breaking the laws, by letting them onto the territory of Ukraine, wouldn’t be seen as anything but the weakness of Ukrainian state. And not in the abstract categories of weakness and strength, which are often used by Russian propaganda, but in a very particular, akin to ones used by Francis Fukuyama. And the inability of applying the coercive measures of the state to deny the entrance to Ukraine for such persons would be choice to support the Russian narrative of “Ukraine is a failed state”, as opposed to the inoperative narrative about the human rights violations. De facto this would be to playing in the hand of Russian in its propaganda game.

Again, as Pavel Kazarin wrote, a a prohibitions like this are about the “development of the conditioned reflex: performing on the occupied territories mean the cancellation of performances in Ukraine, conducting the business in Crimea means getting under the sanctions, breaking the Ukrainian laws means there will be retaliatory measures from Kyiv”.

One thing the case of Samoylova was useful for us is, that now we see that Russian propagandists cannot get out of the box of their own perception of the world around. The initial goal of appealing to human rights and the disability of the singer, which were supposed to be a pity card for the inclusive and tolerant Europeans, wouldn’t work even if Russian propaganda translated this story 24/7 on all its channels. By one simple reason: the very foundation of existence of modern European democracies is the primacy of law, and the equal treatment of everyone from the formal legal point of view. Thus, the very fact of breaking the law or the rules is enough reason for Europeans to ignore the artificial pity of the story.

It was about the same with the suspension of Paralympic national team of Russia at Rio 2016. Then International Paralympic Committee suspended the whole team of 267 Russian athletes, regardless of whether the particular athlete was using doping or not. The reason for such approach was explained by the International Paralympic Committee president Andrew Parsons: “What was discovered is not some petty violation of the obligations. It is a well-planned attack onto the reputation of sport”.

In addition, the case of Samoylova shows well enough the attitude of Russian state towards the people with disabilities, and its denial of the policy of inclusiveness. A clear case of how the inhuman treatment is projected by the state powers through the culture, so there would not be even a request for such Western “manifestations of weakness” is an outrageous Russian movie “Temporary Difficulties”. Of course, financed by the Cinema Foundation of Russia. And it’s not even about Ivan Okhlobystin playing the abusive father who tries to motivate his son suffering from cerebral palsy — well, to simply stop having the cerebral palsy, — by leaving him alone in the woods. The thing is about the concept: Russians don’t have any objective inborn problems which society should be compassionate and tolerant to, the only thing there is, is you don’t try hard enough to overcome those.

Can the country which supports such cultural products on the state level, even have a voice in a questions of moral? Well, this is a rhetoric question.