Russian business in our area

On the economic dependence on the Russian Federation. The points 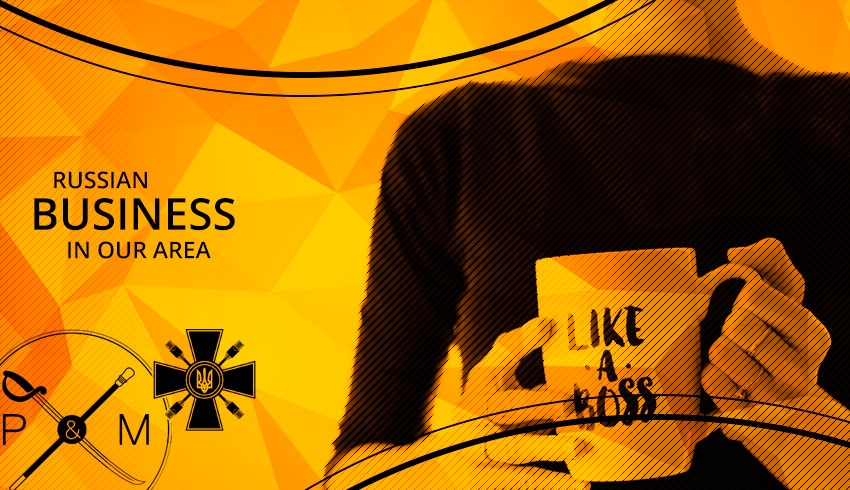 It would be a mistake to think that the expansion of the Russian Federation to Ukraine is limited to propaganda in the media, attempts to interfere in church affairs, sponsoring conditional “Oplot” and political parties with a pro-Russian course. The economy has been and remains one of the main levers of Kremlin influence in the post-Soviet space, and Ukraine is no exception.Despite the sanctions and street pressure from activists, the Russian business mimics, incurs losses, but is in no hurry to wind down its activities in Ukraine. Because the stories about fascism, Nazism and the junta for marginalized people are one thing, but real politics is another. In addition, more than three centuries of continuous cooperation with Russia and the USSR - this is slightly more than 5 years of EU integration. The speed of the processes is, at a minimum, soberly assessed, realizing

Russians themselves like to call Ukrainian daughters of Sberbank, VTB, Alpha and Prominvest as “hostages” after the decision of the Hague to arrest property. The arrest is imposed in the execution of compensation for assets lost by Ukraine on the seized Peninsula. But to explain why after the protests, assault on offices, smoke bombs and sanctions packages, banning any operations towards the parent structures, financial institutions continued to work throughout Ukraine, and the Kremlin’s propaganda was in no hurry.

This is in view of the fact that in 2014, the assets of the Russian four banks dropped from 100 billion to 58 billion UAH, having shown a sharp drop in times in dollars and twice as much in the market share. A small “VSbank” owned by Sberbank was redeemed by Tigipko, who was actively interested in such transactions, but with “VTB” the case ended with liquidation and the Deposit Guarantee Fund. Market share and the degree of influence on the financial market of subsidiary Russian banks are more likely to continue to fall - they have already ceased to be system players in Ukraine, although before the start of the aggression they controlled 10% of the sector. But until their complete liquidation is still far away, especially since an appeal was filed to the Supreme Court over the arrest - Russian capital continues to fight for the junta and the Nazis market.

Here the process of reducing the share of the Russian Federation in the market will objectively drag on for years. Coal imports to Ukraine are growing in 2018 by 10% - both stone and anthracite. More than 60% of it is of Russian origin, the United States and Canada ship about a third of the needs.Switching to the gas group from deficient anthracite will reduce the degree of dependence on coal mined in the Ordlo territory, but only. In only 11 months of 2018, Ukraine imported 7.5 million tons of petroleum products from the Russian Federation, Belarus and Lithuania. And oil products from Belarus and Lithuania, in general, are also of Russian origin by raw materials. Moreover, the refinery in Mazyr is a 42% stake in Rosneft, the one that is under sanctions from the United States. In Ukraine itself, however, the Russian gas station networks (Tatneft, Zolotoi Gepard, TNK, Smile, Formula) do not play first fiddle. The key player in the country's fuel market is Igor Kolomoisky and his structures. But the shortage of gasoline and diesel fuel in Russia itself suddenly indirectly affects the pricing in Ukraine, and the Kremlin’s political decisions in theory may well affect the supply of petroleum products from Belarus.

Fuel assemblies for nuclear power plants - fried news about secret contracts with TVEL OJSC are immediately sent to the firebox, where they belong. In the real world, there was a limitation on an agreement with TVEL OJSC for the period up to 2025, a gradual increase in the share of fuel from Westinghouse and negotiations with the Russians on pricing against this background.After all, the TVEL corporation earns every year from half a billion dollars on fuel, and God himself told them to shake prices in connection with the prospects of the Americans. Despite the fact that Ukraine has created a supply of fuel for the VVER-1000 nuclear reactors for about a year of operation, we have a long way to diversify supplies and modernize the stations themselves. There will be a reasonable balance between the two suppliers with an increase in reserves, avoiding the pressure of any monopolies.

For gas production over 10 months of 2018, consumption fell by 0.8%, production growth by 0.3% - here a long-term step forward, two back. Although extracting 59 million cubic meters of blue fuel per day, we have set a four-year maximum, but we can already conclude that in the next 3-4 years we will not get 100% of the hydrocarbon supply of our production.

Gts. Here, the transit of Russian gas to Europe has decreased by 7%, the money from the "pipe" can vary from 2.8 to 3 billion dollars - this is already less than IT, therefore Russians are interested in alternative routes.True, in addition to the inflow of currency, the status of a transit country gives us a lever to curb Russian aggression, so future negotiations in 2019 will definitely be hot. 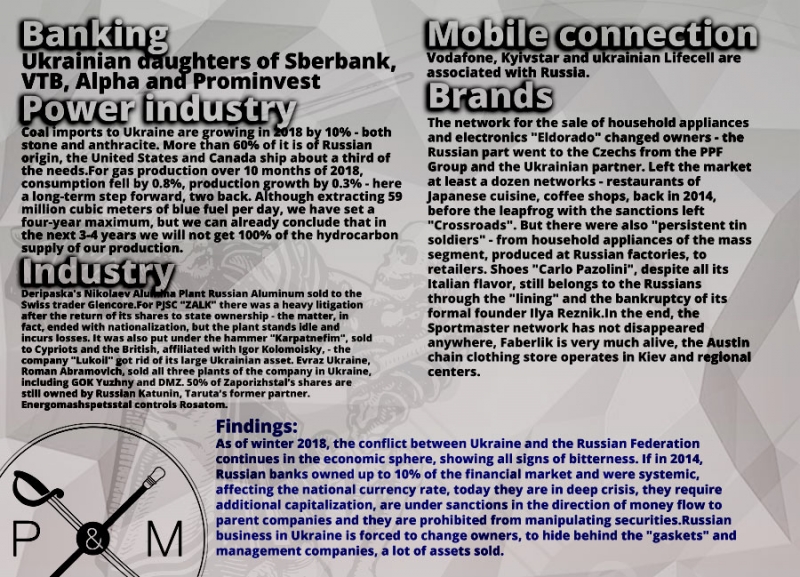 On the whole, there is undoubtedly a diversification of energy carriers - coal contracts with the United States, nuclear fuel from Westinghouse, gas production is slowly increasing. But the presence of the Russian Federation in the energy sector of Ukraine is still above average. Of course, the growth of renewable sources at 160 MW per year has practically no effect on the share of thermal generation dependent on coal from the Russian Federation - “green energy” still amounts to 1.8% in the structure of production volumes. But in addition to generation, the beneficiaries Russians Yevgeny Giner and Alexander Babakov own 8 regional power companies in the country, including Kiev and Odessa, as shareholders of the Dutch company VS Energy. It is still full of work, and the prospects are far from an optimistic ending.

Of the good news here is the adoption of a law in which participation in the Ukrainian privatization of representatives of the Russian Federation and legal entities whose final beneficiaries are not publicly disclosed is prohibited. At the very least, the expansion will not continue, and any encroachments towards the key objects of the Ukrainian market will become easier to track both special services and social activists.Deripaska's Nikolaev Alumina Plant Russian Aluminum sold to the Swiss trader Glenсore.For PJSC "ZALK" there was a heavy litigation after the return of its shares to state ownership - the matter, in fact, ended with nationalization, but the plant stands idle and incurs losses. It was also put under the hammer "Karpatnefim", sold to Cypriots and the British, affiliated with Igor Kolomoisky, - the company "Lukoil" got rid of its large Ukrainian asset. Evraz Ukraine, Roman Abramovich, sold all three plants of the company in Ukraine, including GOK Yuzhny and DMZ. 50% of Zaporizhstal’s shares are still owned by Russian Katunin, Taruta’s former partner. Energomashspetsstal controls Rosatom. It is impossible not to recall Grigorishin and his assets in the country. But in general, here, as in the banking sector, things are starting to get better, and the Russians are winding down their business in Ukraine, or they are helping them to do it.

MTS "Ukraine" has changed the sign under the British brand "Vodafone". But 100% of the company's shares are still through the “gaskets” in Luxembourg and the Netherlands owned by the holding group “System” Yevtushenkov. This is a Russian billionaire, a member of the Council for Science and Innovations under the President of the Russian Federation - 20 million Ukrainian Vodafone subscribers send him warm fraternal greetings. Kyivstar is, of course, VimpelCom, nothing has changed, which means that Mikhail Friedman’s hand is on the Ukrainian market. You can, of course, endlessly say that big business is apolitical, but specifically Friedman is on the so-called Kremlin list from the US Treasury as a potential target for secondary sanctions against the Russian regime. Friedman’s Alpha Group also controls several percent of the shares of Turkcell, the company that owns Ukrainian Lifecell.

The network for the sale of household appliances and electronics "Eldorado" changed owners - the Russian part went to the Czechs from the PPF Group and the Ukrainian partner. Left the market at least a dozen networks - restaurants of Japanese cuisine, coffee shops, back in 2014, before the leapfrog with the sanctions left "Crossroads". But there were also "persistent tin soldiers" - from household appliances of the mass segment, produced at Russian factories, to retailers. Shoes "Carlo Pazolini", despite all its Italian flavor, still belongs to the Russians through the "lining" and the bankruptcy of its formal founder Ilya Reznik.In the end, the Sportmaster network has not disappeared anywhere, Faberlik is very much alive, the Austin chain clothing store operates in Kiev and regional centers.

As of winter 2018, the conflict between Ukraine and the Russian Federation continues in the economic sphere, showing all signs of bitterness. If in 2014, Russian banks owned up to 10% of the financial market and were systemic, affecting the national currency rate, today they are in deep crisis, they require additional capitalization, are under sanctions in the direction of money flow to parent companies and they are prohibited from manipulating securities.Russian business in Ukraine is forced to change owners, to hide behind the "gaskets" and management companies, a lot of assets sold.

But still, the Russian Federation retains partial control or presence over the strategic and sensitive for the Ukrainian state areas - energy, heavy industry, communications.Also, Russian state-owned companies and individuals from the “Kremlin list” are showing interest in the objects of Ukraine’s privatization. We are waiting for a fairly serious work until the companies of the aggressor leave the list of the top 300 richest companies in the country. But for the first time since independence, the influence of Russian business in Ukraine is systematically decreasing, and this trend will continue under the current government. The points of application of Ukrainian sanctions have been chosen reasonably well, and the effect will only increase in the future. The first swallow in the form of liquidation "VTB" has already gone. We hope not the last.