Editor’s note: A multi-part article about a role and a place of Kremlin in a European history of crime. One might ask, how this even connected with a Salisbury poisoning?

Six months after the Sergei Skripal murder attempt in Salisbury, England, National Court of Spain acquitted of all charges 17 suspects, which were investigated by Spanish prosecutors and intelligence service for a duration of over 10 years. They have just withdrawn accusations against people, who were called nothing but “Russian mafia” for a decade.

According to Alexander Gofshtein, a Russian lawyer who defended one of the suspects, a Russian State Duma member Vladislav Reznik, there were no actual acquittal announced in the Spanish court. Perhaps, Spanish officials tried to at least save their faces. Spanish lawyers employed by Russian suspects were simply invited to the court and were presented with a document ( https://e00-elmundo.uecdn.es/documentos/2018/10/18/sentencia_troika.pdf ) which said that their clients are accused no more.

Inglorious outcome, yet another “Putin’s victory” over European Union, that’s how ended the heavily publicized “Operation Troika”, which aimed to uncover the money laundering schemes of Russian elite’s funds of criminal and corruption origin in European countries.

We may consider this a “victory” for Putin simply because all and any operations and large scale schemes where Russia is involved are connected with Russian president, one way or another. Still, there are some other facts which we should consolidate to see the big picture.

But let’s start from the beginning.

Almost 11 years ago, a judge named Baltasar Garson started the investigation, which by year 2015 grew into 460 pages of charge sheet alone. The prime figures of Spanish intelligence and law enforcement investigation were Gennadiy Petrov and Alexander Malyshev, which (according to information from Russia journalists) met each other many years ago in detention facility of St. Petersburg, a well-known “Kresty Prison”.

Spanish detectives believe that Petrov and Malyshev represented the interests of Russian Tambov and Malyshev criminal gangs, respectively. After some time these gangs joined, and were mentioned in the media as “Tambov-Malyshev” group. But this brotherly love didn’t happen overnight.

It was always assumed that the leader of Tambov gang was Vladimir Kumarin (later he took his mother’s last name and became Vladimir Barsukov). In 1989 Tambov gang, which were recently formed back then, had a massive shootout with Malyshev gang, which led to over 70 people from Tambov gang being investigated by Soviet law enforcers.

But after some years gangsters accumulated power and evolved. Just recently Russian opposition politician Alexey Navalny was involved into comical duel challenge from Viktor Zolotov, a head of National Guard of Russia. And during the arguments Navalny reminded to his opponent about the photos from funeral of the Petersburg mob boss Roman Tsepov, where Vladimir Kumarin also can be seen. 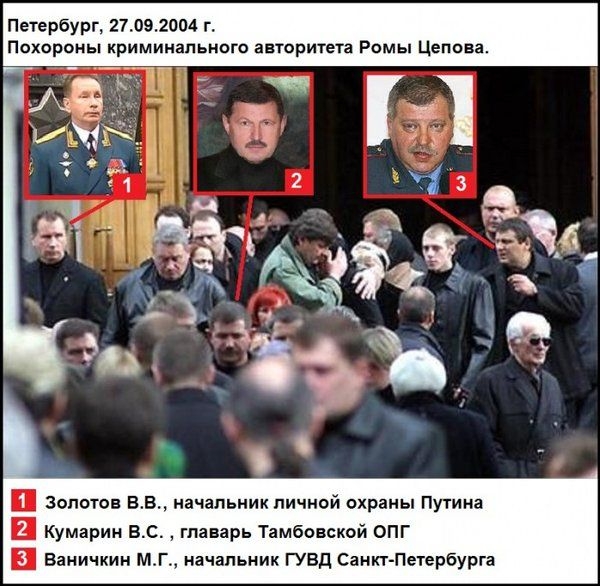 Back then, Viktor Zolotov served as a bodyguard to politician Anatoly Sobchak and his daughter Ksenia Sobchak. But let’s not rush things.

The case against “Russian mafia” which were widely covered in Spanish media since year 2008, were based on the isolated facts of Saint Petersburg businessman transferring their funds to Spain over a period from 1996 to 2008. Supposedly they did this to launder the money.

S list of suspects, which also were mentioned in the document of the termination of criminal proceedings, doesn’t really have familiar or well-known names.

But with some degree of certainty we can assume that some of the names of suspects or their pertners in crime were known by Sergei Skripal.

At September 28th, 2018, Mark Urban, a British journalist, wrote an article for Daily Mail (https://www.dailymail.co.uk/news/article-6220481/Sergei-Skripal-tells-turned-MI6-sharing-secrets.html) talking about his book The Skripal Files ( https://us.macmillan.com/books/9781250207739 ), published by Macmillan at October 4th. In the article Urban gives us a synopsis of his book. In particular, he mentions that after the fall of Soviet Union, an officer of Main Intelligence Directorate Sergei Skrypal was so disappointed in his service that he thought about leaving the ranks. But he was not allowed to, and instead in September 1993 he was sent to Russian Embassy in Madrid to serve as a secretary in matters of science and technology.

According to Mark Urban, who interviewed Skripal a lot, it is there and then Russian intelligence officer first was noticed by British MI6 intelligence. Later, in 1996, when Russian officer’s term was nearing its end, a member of British intelligence tried to recruit him, and succeeded.

Perhaps the book by Mark Urban will give us even more information about Skripal, but even now we can conclude that professional agent of Russian Main Intelligence Directorate was collecting and analyzing information in Spain just in the same time when gangsters of Saint Petersburg and Russia built their money laundering schemes in Europe.

Was he aware of that?

Yes, he was, think Michael Schwirtz and Ellen Barry, authors of a large article on Sergei Skripal which was published in The New York Times at September 9th 2018 (https://www.nytimes.com/2018/09/09/world/europe/sergei-skripal-russian-spy-poisoning.html).

According to them, Skripal visited Spain for numerous times, where he had some contacts with a local CNI intelligence. Spanish intelligence played a large role in the investigation and criminal proceedings against “Tambov” gang. Intelligence officers even acted as a witnesses. And Skripal himself was posioned right in the middle of a trial in Madrid, which started February 18th and ended in April 2018.

Thus, it is not surprising that journalists immediately connected the names of Skripal, Litvinenko (who was poisoned just as well, right when he already had a ticket to Madrid) and Vladislav Reznik, a deputy of Russian State Duma, and a former successful Saint Petersburg businessman, who’s employee at some point of time was Dmitry Medvedev himself. ( https://www.currenttime.tv/a/29477863.html )

More even, during the criminal proceedings there were a number of facts and hearsays which led directly to Vladimir Putin and his entourage. ( https://theins.ru/korrupciya/99750 )

Where the Litvinenko came from?

At Septemer 11th 1998 Yevgeny Primakov was appointed as a prime minister of Russian Federation. That was a hard blow for the Yeltsin “clan”, which in fact controlled the whole country while the president was sick. But to keep the balance the independent figure was mandatory. Especially once prime minister Sergey Kirienko (who now serves as a first deputy of Putin’s Presidential Administration) pronounced the economical default of Russian Federation at August 17th 1998.

By the way, assorted studies of causes of Russian default of 1998 mentioned Boris Berezovsky as one of the reasons. A successful businessman and one closely connected to president Yeltsin’s clan, he was actively speculating on the market of short-term government bonds.

When Primakov became a prime minister, Boris Berezovsky was an executive secretary of CIS, which technically was a decorative diplomatic post. But according to prime minister himself, Berezovsky urged to be a kind of power behing the throne, which of course was unacceptable for intelligence man Primakov.

Being appointed to position, first thing Primakov did was unofficially invited all the heads of security, and asked them for help fighting the embezzlement. (One of those heads of security actually was Vladimir Putin.) During the Davos economic forum he mentioned his strict policy against economic crimes, which cause a plain hysteric reaction of Boris Berezovsky, who criticized the prime ministers openly. ( https://www.youtube.com/watch?v=rlPQrn9yVsc )

So, when the conflict between Primakov and Berezovsky already was public knowledge, at November 17th 1998, Lieutenant Colonel of Russian Federal Security Service Alexander Litvinenko, along with few of his colleagues, gave a quite comical press conference to Interfax news agency. They claimed that Federal Security Service administration forces them to assassinate and kill Boris Berezovsky, which Litvinenko claimed to know personally since 1994.

At the press conference “officers” of the Federal Security Service wear black glasses, and one even wears a ski mask, supposedly to follow the secrecy guidelines. ( https://www.youtube.com/watch?v=MyDjxDZwjGc )

When the conflict reached an impasse, in the beginning on February 1999, task forces were storming offices of Aerflot and Sibneft companies, which were considered to be a financial source for the Yeltsin’s clan. While Yeltsin were in a hospital, Primakov promised to “strengthen the fight with a crime and corruption”. After that Berezovsky counter-attacked him in a public media. And got attacked back. Yeltsin initiated the procedure of relieving Berezovsky from the post of secretary of CIS, while Primakov was trashing him in media.

After the press conference where Litvinenko openly attacked the heads of Federal Security Service, another video surfaces up. In this video the so-called “journalist” Sergey Dorenko (who confessed not once to be working for Berezovsky — see https://youtu.be/Ufbtj14TdpM ) supposedly conducts an interview with an officers of Federal Security Service, namely the department in charge of in investigations and fight with organized crime. You can find the video by the link: https://youtu.be/gobxlY2Vfzg

It is worth of notion that many of the Federal Security Service staff mentioned in this video are also present in the lists of Mirotvorets Center, as the participants of the military activities and war crimes in Chechnya. 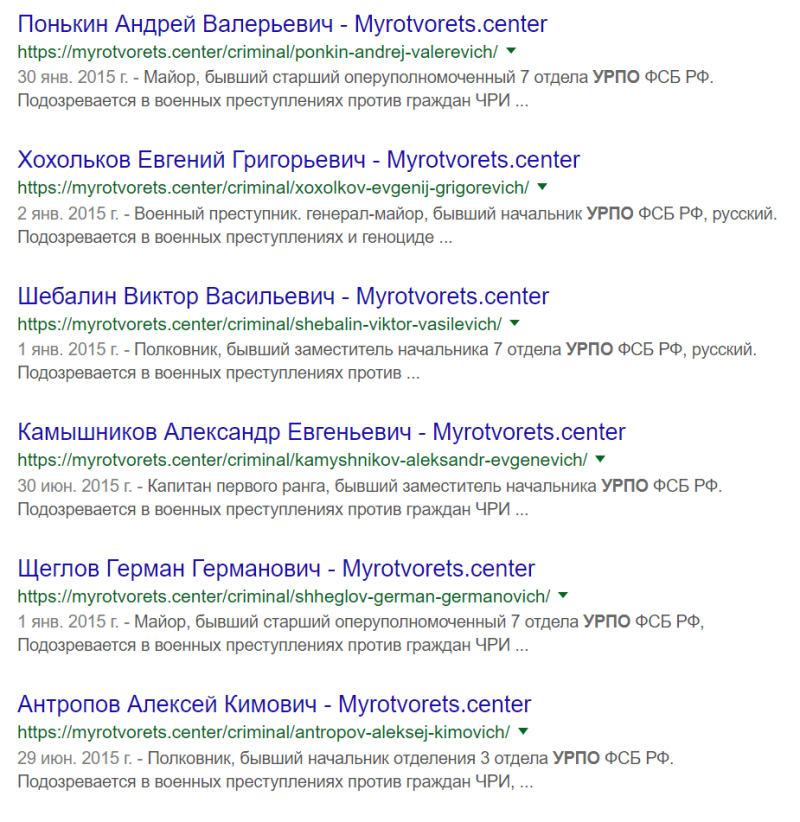 Among the people on video the most prominent is Litvinenko, who’s smiling and eager to talk about how his sources and his colleagues told him, not once, that Berezovsky will be killed.

Also, officers on the video tell about getting orders from their superiors to arrange the kidnapping of Husein Jabrailov, the younger brother of Umar Jabrailov, with a purpose of freeing their colleagues captured in Chechnya (https://www.kommersant.ru/doc/209124).

Both Umar and Husein Jabrailov are well known. Umar was a running candidate for President of Russian Federation, while Jusein was running for presidency in Chechnya. Umar was a member of Untied Russia party until 2017, when he was discharged for gun shooting in the Four Seasons hotel.

In the next article we will talk about the Federal Security Service department in charge of in investigations and fight with organized crime and it’s agents.