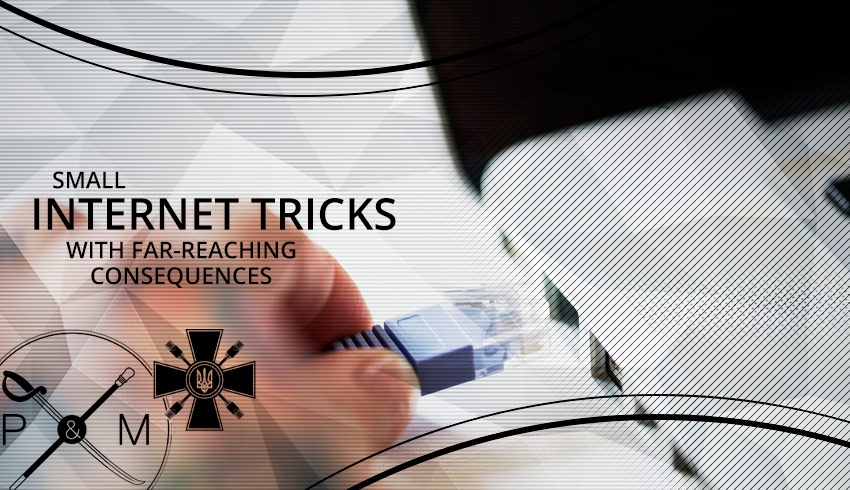 Only in the last 2018 year, the Security Service of Ukraine revealed several groups whose task was to create various online platforms (in social networks and the blogosphere) in order to purposefully disseminate information, including to influence the elections in Ukraine.

On August 30, 2018, the SBU website published information about blocking the network of Internet agitators, whom the Russian special services attracted to preparations for interfering in the course of future presidential elections in Ukraine.

“Recruitment” of kremlebotov occurs, most often, online. The FSB and other special services of the Russian Federation have quite good experience in this, since the recruitment of militants for the execution of Russian intelligence missions in the terrorist structure of ISIL also takes place through forums and online platforms (mainly in Dagestan and Chechnya).

People from different cities - Dnipro, Krivoy Rog and Nikopol - became administrators of groups and pages in social networks. The purpose of these pages was to create sources of information and controlled platforms for communication. At a certain point, these sites will become a place for shaping the views of consumers of information. All this has long been passed and studied. This scheme works on the principle of "thinking of the majority." If it seems that the majority of your respondents have some specific point of view, you agree with it, as a social being that needs public approval.

Such tools existed during the Revolution of Dignity, and later. An investigation into one of these networks was conducted by the team journalists.

texty.org.ua. In their special project, they proved that narratives and messages about the need to organize “Maidan 3.0” are initiated by the Kremlin forces.

The SBU reported that the recruited smm-managers were tasked to search for bloggers and active authors of social networking groups who, for a monetary reward, were supposed to publish political news with a predetermined context that they would send as temniki from Russia. Administrators also had to attract "fake" individuals to register Internet sites in the Ukrainian segment of domain names.

Separate “media technologists” were also to plan and order services for the promotion of Internet resources and content in the agencies of the south-eastern regions of Ukraine. This was supposed to hide their affiliation with the dissemination of fake news and advertising of individual pro-Russian participants in the electoral process, as well as allow them to move to more active activities in the information space on the eve of and during the presidential elections in Ukraine.

The mechanism of such activities is also known. Games on the patriotic feelings of people who are not able to protect themselves with critical thinking. Creating communities that should have been “inflamed” with ideas of violent actions after appeals to “defend Ukraine”.

On December 14, 2018, the same department of counterintelligence protection of information security of the Security Service of Ukraine issued information about mass attempts by the Russian security services to use the open toolkit of social networks Facebook and Twitter in order to further intervene in electoral processes in Ukraine. This turned out to be a part of Yevgeny Prigogine’s LLC Internet Research Agency LLC.

Putin even remembered the latter in his recent press conference, when he was directly asked about the role of the “cook” in the media and political get-together of the Kremlin. In addition, recently it became known that this very Prigogine received a serious development contract in St. Petersburg, with a total volume of about 35 billion rubles. Which indicates that his position near Putin is only strengthened.

According to counterintelligence information, the FIA ​​staff began to send “commercial offers” to Ukrainian users, offer to help in the dissemination of advertising in social networks by providing temporary paid access to the “advertising cabinets” of Facebook pages.

An interesting scheme, which, unfortunately, is not fully described in the SBU. Zuckerberg and his team have changed the rules for the distribution of advertising on Facebook. The Twitter team is also slowly catching up. However, these changes will not reach the Ukrainian segment of social networks soon. They consist in the fact that the administration of social networks allows advertising promotion of materials with a political color only when it is known exactly who is investing money in it.

In other words, taught the bitter experience of campaigns like #BlackLivesMatter in the US FB, which were paid by the Russian special services to sow conflict and division in American society, the Americans finally said, “Enough!” 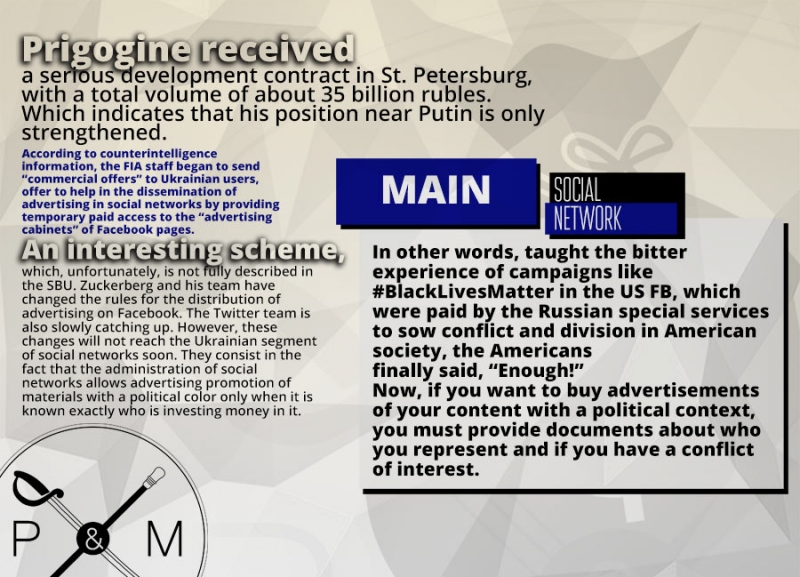 Now, if you want to buy advertisements of your content with a political context, you must provide documents about who you represent and if you have a conflict of interest. However, it is unlikely that this was the reason for the purchase of “prigogine” services to promote its content. The fact is that for effective resonance we need already existing, “not messed up” sources with a definite potential. It makes no sense to spend on their creation, if some regional media for money just provide its platform for placing anti-Ukrainian jeans and open the door to an advertising office on Facebook to disperse it.

SBU proposes to report such things to the hotline, although you could simply create a bot in Facebook Messenger. Alas, innovation is not about this special service.

With the means of delivery of information shells, we figured out. In general, in the information confrontation one can distinguish only two large-scale components. First, it is a message that you need to convey to the consumer of information. The message should encourage him to some kind of action or, conversely, to refrain from them. To do this, it must meet the interests of the consumer and his greatest aspirations in order to touch on the emotional component of decision-making.

Secondly, this is how this message is delivered to the user. You need to know what sources of information he uses and what he believes. It is necessary to have the infrastructure and the people who will make such a report possible. It was about these "means of delivery" and was discussed. And now let's talk about the message itself.

It is a thankless task to consider the Russian interventions with the use of artificially created and supposedly conflicting for the Ukrainian society points that as a result led to the loss of the pro-Western course of Ukraine. This process has not been interrupted since 1991. In 2013, it was only activated on a large scale.

For example, experts highlight the cases of Georgy Gongadze and the campaign “Ukraine without Kuchma” as one of the most successful Russian hybrid operations in Ukraine, which led to the loss of the pro-Western orientation of the state.

According to the head of the Center for Defense Reforms, Alexander Danilyuk, Major Melnichenko, who allegedly recorded talks about the murder of Georgy Gongadze in the office of President Kuchma, and then hid in the United States. with whom they studied at the KGB high school in the 80s. A month before his death, Alexander Litvinenko stated that Major Melnichenko was in regular contact with the FSB, was constantly flying to Moscow, and even gave the name of the head Melnichenko to the FSB - General Pavlovsky.

The same kind of manipulation was the message of Viktor Yanukovych before the 2004 elections, about the Ukrainians' card divided into three classes allegedly distributed by democratic forces, where the Donbass was specially portrayed in a third-grade form.

In fact, to identify such vulnerabilities in the information space of a single nation is not so difficult. Take the sociological research of the last period to find out exactly which questions the residents of the country consider to be the highest priority. Get this information is easy.

It is clear that the main priority of Ukrainians, according to all existing sociological research, is peace in the Donbas. The last escalation of events in the Black Sea near the Kerch Strait and the introduction of martial law only actualized this issue.

Staying in the stage of uncertain conflict is absolutely unnatural for a person. For the most part, discomfort generates ignorance of what to expect and what to do. The lack of information leads to a lack of decision making. And he is the key to constant frustration and demands for change.

Thus, the message is quite understandable - “vote for me tomorrow and I will ensure you the advance of peace the day after tomorrow”. Well and, accordingly, in the opposite direction - “do not vote for someone who does not promise immediate peace.” Almost all public potential presidential candidates have already said this. Even Vladimir Zelensky in his interview with Dmitry Gordon said that he knows exactly how to achieve peace.

In his opinion, for this you need to go to negotiate "with the damn bald" and ask him to provide a list of requirements, and in response to give out your list. Then come together "somewhere in the middle." And the decision on whether the result is acceptable can be obtained either in a referendum or during the "online voting on TV." In other words, the fate of the 40-million Ukrainian people can be decided in the format of a TV show. The fact that a carpenter turns any tool into a hammer is not new. The problem is that such simple solutions are very attractive for people who are tired of our whole situation.

Neither this nor the other narratives are a secret. The goals for which the Kremlin will beat before the elections are obvious: peace, prosperity and ability to pay their bills, issues of corruption and extortion, updating the political landscape. It is these topics in different interpretations that we will soon see on billboards, on the Internet, on TV - from every iron. You just need to remember that some of these votes were paid for by Putin’s entourage.